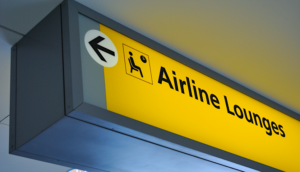 This One Credit Card Gets You Into 1,000+ Airport Lounges

No business-class ticket? No problem. With the Platinum Card® from American Express, you won’t mind that long layover, and you might even want to arrive at the airport a few extra hours early.

The Platinum Card® from American Express is a popular choice among travel credit cards due to its wide range of travel benefits. But one of the most rewarding features the card provides is opening the door to thousands of airport lounges across the globe.

Airport Lounge Access with the Platinum Card from American Express

Usually tucked away from the hectic and clamorous main terminal action, airport lounges offer a much-needed recess from the frenzied airport atmosphere. Providing a welcoming place to relax during your travel day, most lounges feature dedicated high-speed Wi-Fi, power outlets/charging stations, snacks or more substantial fare, and free drinks (including coffee, tea, soda, and alcohol, depending on location). You might even find personal bathrooms, showers, or if you're lucky – a spa to help you relax after arriving on that overnight red-eye.

With one of the most extensive networks of options available for cardholders, the Platinum Card® from American Express allows entrance to a wide variety of VIP lounges worldwide. Below, I'll break them down into categories, and explain what you can expect from each type of lounge, accompanied by a list of all their locations. 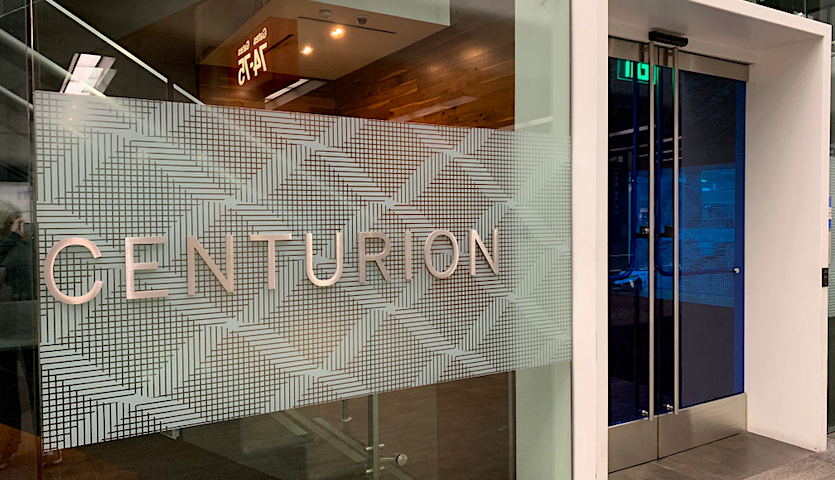 Centurion Lounges are located in eight airports in the United States (DFW, IAH, LAS, LGA, PHL, MIA, SEA, SFO) with the sole international outpost for the time being in Hong Kong (HKG). Regarded as the crown jewel in the American Express lounge portfolio, these oases are considered among the most modern and stylish spaces for discerning travelers.

Featuring the standard amenities like high-speed Wi-Fi, private business seating areas, flatscreen TVs, and shower suites, the Centurion lounges set the bar higher than their competitors with a focus on food, drinks, and atmosphere. Lounges have menus designed by award-winning chefs, handpicked wine selections from top sommeliers, and a series of signature cocktails by mixologists. Specific salons even offer tranquility areas and the option to spend your time stripping away stress during a spa therapy before boarding.

In addition to The Centurion lounge network, American Express operates 13 lounges exclusively for cardmembers internationally: six in Mexico (three in MEX, two in MTY, and one in TLC), two in India (BOM, DEL), one in Argentina (EZE), one in Brazil (GRU), one in Sweden (ARN), and to round it out, two down under in Australia (SYD, MEL). While these lounges are not categorized as Centurion lounges, they provide the same quality and comfort you 'd expect from an American Express branded lounge.

Access to all of these clubs is complimentary for Platinum Card® from American Express members. Being a cardholder also allows you to bring up to two guests at no extra charge. If traveling with a larger group, day passes for any additional guests can be purchased for $50 at the time of entry. 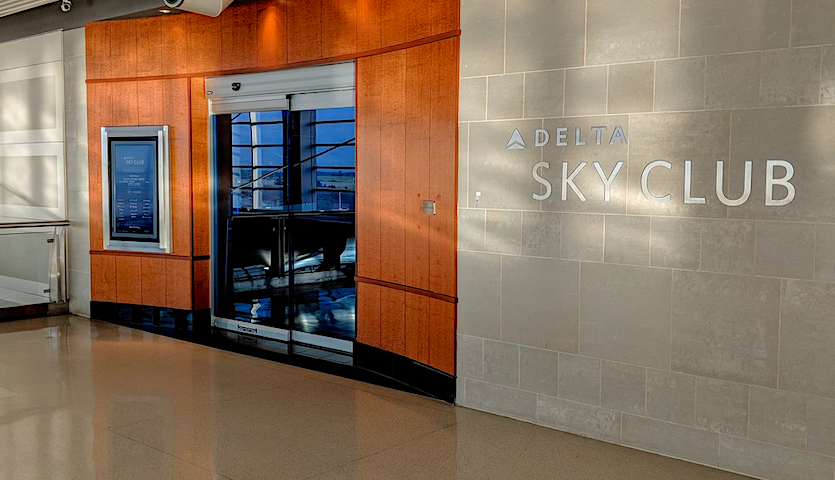 For frequent flyers who favor Delta Air Lines, the Platinum Card® from American Express is also an excellent choice for its lounge access options. Platinum Card® from American Express members gain access to 35 Delta Sky Clubs, as long as they have a ticket for same-day travel on a flight operated by Delta. Out of the 35 locations, 33 are spread nationwide among top domestic airports, with the two international lounges located in Tokyo, Japan (NRT), and Santiago, Chile (SCL).

While Sky Clubs vary in size and décor, most provide the common staples found in airport lounges, such as free soft and alcoholic drinks, snacks, high-speed Wi-Fi, TVs, productivity centers, and showers in select locations.

Unlike the Centurion lounges, Delta Sky Clubs only allow complimentary access for the primary Platinum Card® from American Express cardholder; all additional guests must pony up $29 per person to enter the lounge. 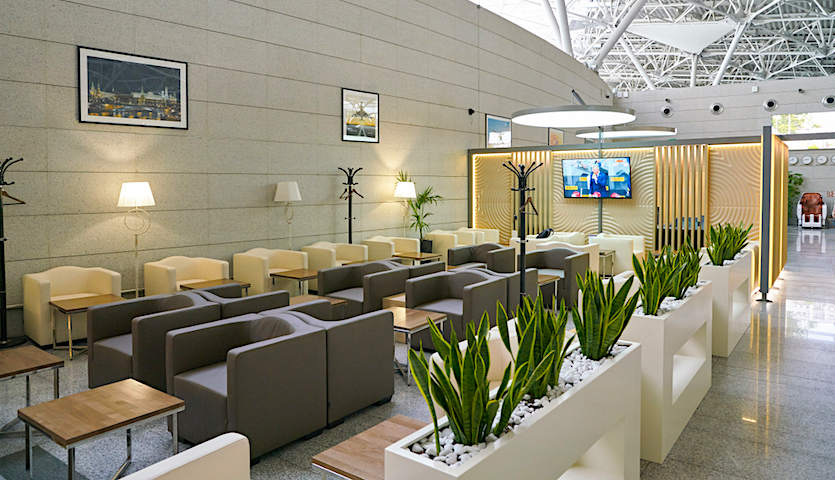 In conjunction with the Platinum Card® from American Express, holders are entitled to a complimentary membership in the Priority Pass network. After enrollment, cardholders will receive a Priority Pass Select membership, which allows them and up to two guests access to lounges worldwide, no matter which airline or service class you're ticketed in. Additional guests can enter for $27 per person, although I have found that lounges have different policies and on occasion, won’t limit the number of guests per card.

While the two lounge options detailed above are great for domestic travel, the Priority Pass is the clear winner when it comes to international travel. Priority Pass has an extensive roster of lounges that tally over 1,200 locations across 130 countries, and the list seems to expand monthly. Locations will vary in size and amenities, but major airports often have multiple options available so you can choose the one that best fits your travel needs.

Related: These Are All the Priority Pass Restaurants in the U.S. 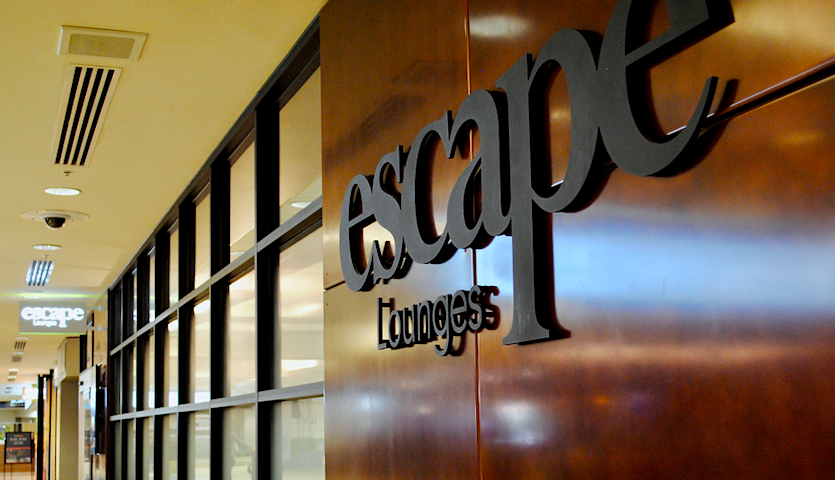 These two separate lounge groups also open their doors to Platinum Card® from American Express cardholders, and although the networks are smaller, they still warrant a mention.

Airspace has a small lounge presence with only two locations found in Cleveland (CLE) and San Diego (SAN), while Escape Lounges' imprint has been steadily growing over the couple years. Now available in nine domestic airports with a Phoenix (PHX) space opening shortly, Escape Lounges are an increasingly good option for flyers looking for tranquility in the terminal. Even for road warriors across the pond, as three airports in the United Kingdom (EMA, STN, MAN) also house Escape outposts.

Both lounge networks permit Platinum Card® from American Express cardholders to bring two guests at no additional cost. Fees for additional guests beyond that will vary by location. As with the other VIP lounges, you should expect standard amenities such as free soft and alcoholic drinks, snacks, high-speed Wi-Fi, TVs, and dedicated business centers.

Escape Lounges Accesbile with the Platinum Card from American Express: