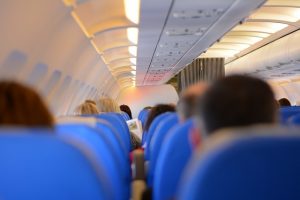 First went the pretzels, followed by a few inches of legroom. And now? Some airlines—including United and American—are quietly getting rid of seatback screens on short haul flights.

For those of us who rely on in-flight entertainment to catch up on all the so-so films we would never actually pay to see at the cinema, this news comes as a bit of a bummer.

Why rob passengers of the option to binge-watch 5 hours of the Crown? Money, of course. Seatback screens are expensive, sometimes costing as much as $10,000 per seat to install, according to Dan McKone, head of travel and transportation at the consulting firm L.E.K.. That's quite an expense for something that not every passenger wants to use, and will most likely be obsolete in a few years anyway.

Carriers will instead direct passengers to in-flight apps for streaming films and TV shows via their own smartphones, tablets, and laptops. Fans of the seatback map screen, don't panic. These apps, at least the ones we've seen in the wild, still include the map feature for tracking flight progress.

Does this mean more seatback outlets popping up in Economy? We won't hold our breath.