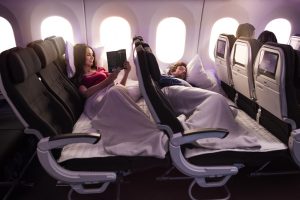 Airlines make a big deal about the comfort their lie-flat seats provide to business and first class customers. It’s unusual today to find an airline that doesn’t offer 180-degree recline, fully-flat seats in their business and first class cabins on long-haul flights. Even so, let’s face it: sleeping well on a plane, even sleeping fully horizontal, is a challenge. The cabin air is just as arid in first class as it is at the back of the plane, the engines and HVAC systems make the same amount of noise, and even in a “dark” cabin you’ll experience light pollution from illuminated signs, other passengers’ reading lights, and those ubiquitous in-flight entertainment systems. It all makes sleeping while flying an iffy proposition.

And about those seats: sure, they’re lie-flat, and they're way better than an economy class eat, but are they wide enough for you to switch sleeping positions, which most of us do, shifting from back, to side, to fetal position, to stomach, during the night? In most cases, no. They’re simply not wide enough, in my experience, especially if you have broad shoulders. And many of them aren’t long enough, either, if you’re six feet or taller, so your head touches the top and and your feet are jammed at the bottom of the seats if you’re fully stretched out.

Some airlines, realizing that their business class seats have become so posh that they're cannibalizing their first class cabins, have made the first class experience even more comfortable and luxurious. The in-flight video screens are larger in first class than in business, the food is better, the service is more personal, and the privacy greater. More to the point, a few airlines have further improved the first class sleeping experience compared to business class, providing not just a seat that turns into a "bed" but a real bed as well.

Etihad Airways, for example, offers its “Residence” product on flights flown by Airbus A380 aircraft. Each plane has just one of these ultra-luxurious sanctuaries, consisting of a private lavatory, a sitting area, and an actual bed, that accommodates two people. For the price you pay (a recent search for a one-way, eight-hour flight from London to Abu Dhabi, a flying distance of 3,402 miles, yielded a fare of $17,800 for two passengers) you could almost hire a private jet; but it wouldn’t be as comfortable as what Etihad offers or as safe for that matter. 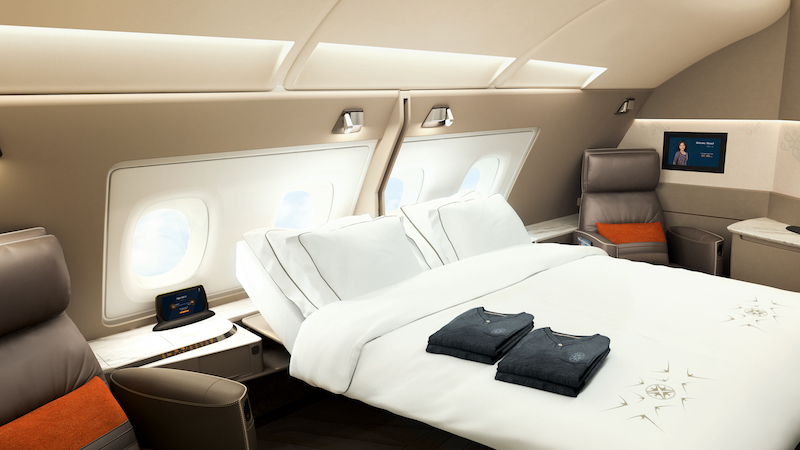 For a lot less money, however, Singapore Airlines late last year introduced a new “Suites” first class cabin, also only on A380 aircraft, that will feature, in addition to a seat, a real bed, “not a chair that turns into a bed,” as Singapore Air makes clear on its website. A flight from Singapore to Sydney (3915 air miles) will set you back around $5,400 one-way, not cheap of course, but a bargain compared to Etihad’s Residence. Two adjacent Singapore Suites can even be combined into a single unit with a commodious double bed, creating a private bedroom in the sky.

With the possible exception of the much more expensive Etihad Residence, to my mind the Singapore Suites are currently the most comfortable and spacious first class “seats” in commercial aviation (I wrap the word in quotation marks since calling them mere seats doesn't do them justice). Perhaps the most clever aspect of this product is that the bed tucks away in the wall when not in use--an airborne Murphy Bed--giving occupants a huge amount of living space.

If you like to stretch out when you sleep in flight, but first class is a stretch, may I suggest one other favorite way to do it, and for a lot less money. Air New Zealand in its economy class cabin offers something called the “Skycouch.”

Think of it as a sofa bed in the air. It’s a row of three economy seats that one or two people can book. When fully configured, the seats are completely horizontal and measure 61 by 29 inches. Skycouch reminds me of my student days flying back and forth between the U.S. and London during vacation breaks, when flights were only half full and everyone got a row of three seats to themselves to stretch out in. But Skycouch is much more comfortable and spacious than a row of three seats back in the day, not least because they come with a mattress pad and a clever use of the footrest extends the seats' depth. If you sleep sideways in the fetal position as I do, then these seats might actually give you more wiggle room than even a business class lie-flat seat offers. American Airlines’ 787 Dreamliner business class seats, for example, according to Seatguru.com, measure 21 inches wide compared to the Skycouch’s 29 inches. And if there are two of you and you’re spooners, the economics make sense. Even if you’re traveling alone and buy all three seats in the row (say, $500 times three on a Los Angeles to London Air New Zealand flight), the $1,500 you’d spend round-trip is a lot less than a business class seat on American, which recently cost over $8,000 on the same route.

And in case you're wondering, I've never actually flown in any of these seats, er, beds, although I have sampled them on the ground, if only briefly.