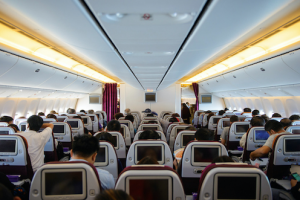 Book Economy, Pay for Economy Plus? No Thanks.

Q. I purchased a great fare from Chicago to Paris on United through Orbitz. When I got to the seat selection part, the site claimed that online selection for this flight had ended, so I called United only to be told that they would not give me seat assignments until I checked in at the airport. Since this was a very long flight and we were traveling as a family of four this was really rather upsetting, so we arrived at the airport extra early to get our seats. After waiting in a huge line to see an agent he told us that there were no seats left in economy but that we could sit in "economy plus" for $398 more per person! After refusing this ridiculous offer he proceeded to go ahead and give us the seats in economy plus anyway at no extra charge - basically they are overselling regular economy then trying to scam customers into paying extra for five extra inches of legroom! Is this a common practice?

A. It's good that you stood your ground. If regular economy was oversold, then United would have had a choice between upgrading you for free (which they did) or bumping you (involuntary denied boarding) and compensating you in cash. Unfortunately, we've heard of other instances where United would only assign seats in advance if passengers upgraded to their Economy Plus seating. Keep in mind that it's becoming a more common industry practice to charge for advance seat assignments, or to offer the perk only on more expensive fares.