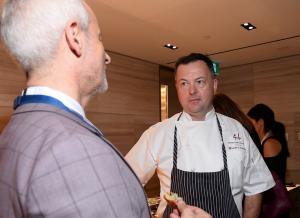 Spoiler alert: it’s because the food in the lounge will be so much better.

All the items on those airline meal trays were carefully laid out just like a TV dinner, with the bread and butter in their special spot, the little iceberg and tomato salad in another container, the main course front and center, a small tub of salad dressing in one corner of the tray with its TWA or Pan Am logo printed on the lid, flanked by a piece of foil-wrapped soft cheese in another, a coffee cup escorted by a similarly logo-ed creamer next to a little square of dessert, most likely a frosted white cake, also in a small plastic dish. Everything in its place, everything served all at once.

It wasn’t very good but we didn’t know it back then, or at least I didn’t. I ate it all up, down to the last crumb. Now, of course, goodbye to all that, at least on most economy class flights. Today, the food, when and where served, no matter how tastefully prepared and presented, is still not as good as eating in a fine dining restaurant on the ground. Part of that disconnect has nothing to do with the food itself; it’s because when we fly at altitude in a cabin with one percent humidity, our taste buds and mucous membranes dry out. Nothing tastes as good in the air as it does on ground.

Which brings me to why eat in the air at all? Why not dine on the ground before you fly? That’s what some airlines are increasingly proposing for their business and first class clients. They’ve established pre-flight dining options in their airport lounges for their best customers. Only problem is, some of these airline “restaurants” aren’t all that good, and because of my previously stated fascination with dining at 40,000 feet, I’ve typically waited until on board to eat when I’m in business or first class, even if the meal is served at 9 or 10 p.m., which is late to eat dinner unless you live in Barcelona.

Which brings me to Air Canada’s new international business class lounge at Toronto’s Pearson International Airport (it's called the Air Canada Signature Suite). This new exclusive (in the true sense of the word) airport lounge has all the usual things you’d expect—comfy seats, WiFi, an open bar, and food. But what food! I think of this as more a fine dining restaurant that happens to be in an airport than merely a place to wait for boarding.

Under the direction of Vancouver-based celebrity chef David Hawksworth, this is a revelation, easily the best food I’ve ever tasted “airside” in a business class lounge (Qantas’s first class lounge in Sydney compares favorably, as does Qatar Airway’s first class dining in Doha). I was treated to a sneak preview when Air Canada revealed the lounge to invited guests recently. When I say “exclusive,” I mean it, exclusive as in excluded.

Excluded are business class passengers traveling on a frequent flier award ticket and even those passengers with the highest possible status in the Star Alliance, the airline consortium to which Air Canada belongs along with over a dozen partner airlines (in contrast, United's new Polaris lounges, which also offer a fine dining experience, let in some Star Alliance status-holders as well as those holding first class award tickets). To get in to Air Canada's new lounge, you need to be flying on a paid business class ticket, and flying to Europe, Asia, or South America. Period. And when I visited, there wasn't even signage pointing the way to the lounge. Maybe they've added that by now, or maybe they want to keep it a secret like a private club. Chef Hawksworth and staff can cook. There was a grilled lamb chop perfectly tender, succulent, and accompanied by roasted cauliflower, yogurt, and mint chermoula (a marinade popular in North African cuisine). There was soy-marinated sablefish, braised beef cheek with pickled mushrooms and jalapeno. Albacore tuna sourced from British Columbia, and seared foie gras. From the buffet, there was a boeuf bourguignon as good as the one I make from an old Julia Child recipe. All five starters and five main courses on the menu are made to order in the adjacent and impossibly cramped kitchen by a staff hand-picked by Hawksworth, but there's also a buffet with hot and cold selections such as a delicious pork sandwich.

What’s significant here is that you really, really won’t want to eat on the plane, even if you’re the kind that likes to take pictures ad nauseum of every course for your blog and Instagram feed. Eat on the ground, settle in your lie-flat seat, plug in the headphones or ear plugs, secure the eye mask, and get ready for a good snooze.

By eliminating the need or desire to eat on the plane, by providing not-to-be-missed cuisine on the ground, I predict that Air Canada’s business class long-haul cabin crew will be serving fewer meals after take off, unless a passenger had such a tight connection that she had to rush from gate to gate and had to skip the lounge.

Speaking of which, since Chef Hawksworth's cuisine is cooked to order, allow 15 minutes for first courses and 30 minutes for main courses to be served, unless you just want to graze from the buffet.

I will miss the ritual of the in-flight meal service on Air Canada just as much as I miss those sixties-era economy class airline meal trays with their carefully arranged little plastic containers. But from now on, whenever I fly internationally connecting through Toronto in business class, I’ll be stuffing myself at sea level.