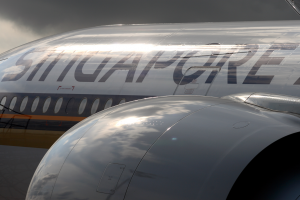 Singapore Airlines Now an Even Tougher Act to Follow

It’s from two words in Hokkien, a Chinese dialect still spoken in the island nation: kia (afraid) and su (to lose). It can also be interpreted as “taking extreme measures to achieve success” according to Wikipedia, which also defines it as being "super competitive."

How fitting that Singapore, which was nearly obliterated by the Japanese during World War Two, would create such an expression. In the years since, under the leadership of its first prime minister, Lew Kuan Yew, this city-state one degree north of the equator has become an economic powerhouse with the world’s highest percentage of millionaires per capita and the highest cost of living. And it all happened so fast: in a single generation Singapore became a first world country.

I thought of kiasu recently on a trip to Singapore to view the results of a $850 million investment that Singapore Airlines will make to upgrade its Airbus A380 fleet in all four cabins (economy, premium economy, business, and “Suites” which is what the airline calls its first class product on the A380).

The airline’s CEO, in a speech at the media launch, attributed the re-design to a “relentless pursuit of excellence…to meet our customers’ evolving expectations.”

What, exactly, was wrong with the old cabins? Nothing that I could see, but this being Singapore nothing is ever yet good enough, especially when you face well-financed competition from those upstart Persian Gulf airlines.

Among the most notable aspects of Singapore’s A380 cabin refresh: The Suites now encompass an even larger space with even more privacy. The bed tucks into the wall (like a Murphy Bed) when not in use, maximizing space. A leather lounge chair swivels and reclines. Two passengers traveling together can combine the beds to form a luxurious double bed. There are two lavatories for the six suites passengers, who will probably never have to queue to use them.

The business class seats “slide down” now to a flat position rather than requiring passengers to flip down the seat back to form a bed. New lighter-weight composite materials increase the space under the seats, allowing passengers to stow a standard 22-inch carry on bag beneath the seat in front, thus eliminating the need to use overhead bins. Business class seats can also be made into a double bed and they now offer even more privacy.

The economy cabin will undergo a complete redesign with a larger inflight entertainment screen and slightly wider seats, more “knee space” and improved back support.

The sincerest form of flattery

“Service that even other airlines talk about,” Singapore once boasted in its ads. But those Middle East carriers (Etihad, Emirates, and Qatar) didn’t just talk about their well-established rival: they’ve tried to copy Singapore Airlines down to the last detail. You know what they say about the sincerest form of flattery.

The key to the Gulf carriers’ success in the past few years is geography: if your hub is in the Middle East you can link any two places on Earth with a single connecting flight. But with the advent of new longer-range Airbus A350 aircraft, Singapore will be able to fly nonstop from New York, LA and San Francisco to Singapore and from there to Asia, Africa, the Middle East, and beyond with a single connection.

There was one thing, however, that the Gulf airlines weren’t able to clone: They recruit cabin staff from around the world, and house them in company “dormitories” in Dubai, Doha, or Abu Dhabi, whereas over 80 percent of Singapore’s cabin crew are Singaporeans. Does this make a difference? Yes. Singapore’s cabin crew represent not just their airline but their country, of which they’re obviously proud, every minute they fly, and because they get to go home and see family every week they’re probably not as homesick as flight attendants living far from where they were born. Emirates Airline boasts that their 20,000 cabin crew represent 135 nationalities. Singapore boasts of its “Singapore Girl.”

“That’s what the call button is for”

And cabin crew, even more than shiny new seats and cabins, make or break an airline’s reputation.

I was sitting in a first class window seat on Virgin America flying from Newark to LA, having upgraded myself last minute at a hugely discounted fare. It was an evening flight, and the sole flight attendant working first class served a meal and one round of drinks before disappearing. My seatmate on the aisle turned to me after dinner wondering why he wasn’t offered a refill of his drink. So he got up, walked to the back of the plane, returned with his fresh drink and reported back that our flight attendant was chatting with crew members in the rear galley. In case you missed it, this passenger carried his own drink back to his seat. The flight attendant didn’t tell him, “Oh, sorry, go back to your seat and I’ll bring your drink." The guy carried his own drink back to first class.

Just before final approach, our flight attendant at last returned to make sure we were safely buckled in and I asked him if there was an emergency back in the economy section. I wasn't being smart; I really thought that could be the only explanation for his four-hour absence. “Why?” he responded, to which I replied, “Well, we didn’t see you for most of the flight and it would have been nice to get a second drink.” His reply? “That’s what the call button is for.” Wow. “I only use the call button for emergencies” was all I could manage to say. I was too gobsmacked to say anything else.

Now let’s take a look at my most recent flight on Singapore, which probably has topped the various airline “best” lists, surveys, and polls more than any other airline.

To become a stewardess or steward for that storied airline (and yes, they still call them that on Singapore) you need to go through a 15-week training course. That’s twice as long as most other airlines require (it’s paid training, and no, not everyone makes it through).

I’ve taken at least 20 flights on Singapore over the years, including the discontinued but soon-to-be re-launched 18-hour nonstop from Newark to Singapore, in economy class (it’s not as grueling as it sounds) and every flight is consistently the same, no matter what cabin I sit in. If a Singapore steward told me “that’s what the call button is for” and I reported it, they’d be fired the next day. But of course, that would just never happen.

You don’t need the call button on Singapore. You just have to look like you might need something.

It was only on my most recent flight that I took careful note of the cabin service.

After dinner, I felt like having a double espresso. I spied a steward walking through the cabin down the left aisle (this was a twin-aisle 777 and I was on the right aisle). He noticed me glance in his direction. I didn’t smile or raise my eyebrows, wiggle my ear, or signal him in any way. I just made eye contact with at him for a quick second and immediately looked away. After all, he wasn’t my steward and was probably headed back to the economy section. Before I knew it, he had walked down the left aisle, through the galley and back up to the first row of business class where I sat, asking if I needed something. His telekinetic appearance at my side brought to mind how the English novelist P. G. Wodehouse describes one of his creations, Bertie Wooster’s butler, Jeeves, walking into a room. Jeeves never merely walks. He “materializes” or “floats” or “glides” into a space at the precise moment he's needed and, after providing whatever service was called for, just as quietly evanesces. So kudos to you, sir, on SQ12 on the 4 November 2017 Narita to LAX segment.

This is kiasu-inspired service in the extreme and no airline cabin crew do it as well as Singapore’s do. They are trained to be ever-present but unobtrusive, patrolling the cabins to make using a call button superfluous.

I’ll probably never travel in Singapore’s new Suites cabin, but no matter where I’ve sat on one of their flights I’ve never had to use the call button. It is kiasu incarnate.