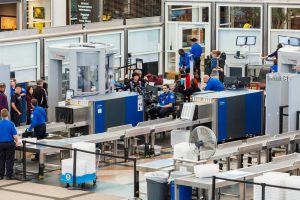 Is it Possible to Bring More Than 3.4 Ounces of a Liquid Through Airport Security?

When can you take more than 3.4 ounces (100 milliliters) of a liquid through airport security? When that liquid is actually a solid—a frozen solid, that is.

Many travelers are familiar with two exemptions to the TSA's liquid limits: medications and children's nourishments (such as breast milk, formula, and juice). But it turns out there's a tiny loophole in the 3-1-1 rule that allows you take a frozen liquid onto the plane. With a lot of caveats, naturally.

The TSA does allow frozen liquids if they're frozen solid when you go through security, but it's more of a challenge than you might think.

Let's start with the example of getting alcohol through airport security. The first caveat is that the freezing point of an 80-proof beverage is somewhere around -17 degrees F or -27 degrees C. Stronger stuff freezes at still lower temperatures. Those freezing points are well below the typical temperatures in household freezers, which means you'd have to go to such extreme measures as dry ice or liquid nitrogen to get the stuff cold enough to freeze solid. Obviously that's not going to work.

RELATED: 10 Classic Cocktails You Can Make on the Plane

The next problem would be keeping it cold enough not to melt at all. A liquid frozen at, say, -20 degrees doesn't stay at -20 degrees very long when it's carried around at room temperature, and even a little bit of melting would trigger the liquids rules. Also, you don't find dry ice or liquid nitrogen at most airport retailers.

The third problem is possible alteration in taste. And here I have no evidence at all—it's just that a freezing-melting cycle could well alter the fine balance of flavor components.

It's a least a bit more practical to freeze a bottle of drinking water and bring that through airport security. It freezes at a more reasonable temperature and has the potential to stay frozen longer in the proper container. Presumably if you catch the airport security line at a time when there are minimal waits, you might be able to get your frozen water through security and drink it on the plane. Chilled, naturally.

Of course, that's an awful lot of effort to go through just to game the system. My suggestion: Suck it up and shell out the airport's rip-off price for a drink. Just because you theoretically can do something doesn't mean it's worth the effort.

Read the original story: Is it Possible to Bring More Than 3.4 Ounces of a Liquid Through Airport Security? by Ed Perkins, who is a regular contributor to SmarterTravel.