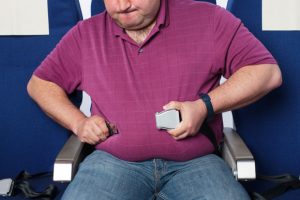 Should obese passengers be required to buy an extra seat?

Should "customers of size" pay for their excess baggage?

You're paying more to travel, and not just for your plane ticket. Every pound counts as the number of carriers charging for all checked luggage racks up. So it stands to reason that the public might be wondering why the airlines don't charge passengers with significant overages of a more, uh, personal nature.

Southwest calls them "customers of size." Medical professionals would use the term obese. Bloggers and message board habitués use names that are a lot less polite.

Many people assume that fat people are getting a free ride. But are they? Nearly all airlines keep it very quiet, but many have policies – informal or formal – in place to make sure that passengers of size carry their own weight.

It's a tricky business. In some corners – Canada, for instance -- it just got trickier. A winter ruling barred Canadian airlines from discriminating against "clinically obese" customers. Southwest was successfully sued by a passenger who was told she needed to purchase a second seat after she had already boarded – too late, the ruling found. An ample Air France passenger won a case after citing humiliation at the hands of staff who wrapped packing tape around him in public to prove that he was too fat to sit one seat, forcing him to purchase another.

Here's the funny part about those lawsuits. At the time, both Southwest and Air France had actual policies in place for dealing with overweight passengers. Southwest's policy has been around for years. It states that if staff determine that the passenger will not fit in one seat, the passenger must purchase a second, a cost which will be reimbursed if the flight is not full.

Air France's policy was more loose, urging passengers who knew that not having an empty seat next to them would be a problem, to handle it on their own in advance. (As of this writing, Air France passengers "with a high body mass" are warned that if they do not purchase an extra seat their own, they may not be allowed to board.) In the end, both airlines were punished for being up front with their customers, even if the execution of the policy perhaps needed work. This is, after all, a terrifically sensitive matter.

Perhaps that is why the topic, with many airlines, tends to be something along the lines of That Which We Don't Speak Of. Ask a major carrier like United Airlines what rules they have in place for dealing with the situation, and you'll hear a pregnant pause (followed by a terse "we have no policy.")

American Airlines is more forthcoming, but hastens to emphasize that it does in no way require its passengers to purchase two seats. Spokesman Tim Wagner does say that passengers whose weight exceeds 250 lbs. should know that there are "possible limitations that could result in American not being able to accommodate them." He also states that the airline urges passengers to "recognize ahead of time that they may need to purchase two seats." He also cites the FAA regulation that all airlines adhere to – if you can't snap the seatbelt (after the extension is added, that is) you can't fly.

JetBlue doesn't mind taking a more straightforward stance. Spokesperson Alison Eshelman says that their policy "requires" larger customers who need an additional seat for their own comfort to buy one in advance. If they do not, and the crew cannot accommodate them, they will be required to buy the seat in any case, with no refunds. (However, Eshelman notes correctly that JetBlue does offer its passengers a little more wiggle room with their larger-than-average seat width on board the airline's A320 aircraft.)

But what of the growing awareness among the traveling public that it costs the airline more to transport an obese passenger than a passenger of average weight?

Those hoping for any type of joy in that department should sit on their hands. (See: Lawsuits.) Delta's Susan Elliott states clearly that the airline "has no plans to implement any policy that discriminates against any of our passengers." Translation: This is one hot potato ain't nobody going to touch.

DOES SIZE MATTER?
Here's a look at how different airlines deal with the "customer of size."

SOUTHWEST
Passengers should plan on purchasing an extra seat or risk being asked to do so at the airport by staff. If the flight is not sold out, the passenger may claim a refund.

AMERICAN
Airline states that passengers over 250 lbs. should recognize that there may be limitations to the service that the airline can provide, however, it does not require that you purchase an extra seat automatically.

MIDWEST AIRLINES
Like Southwest, passengers are encouraged to know their needs in advance. If staff determine that two seats are required, the seat will be sold at the lowest possible fare, with a refund available if there is one or more open seats on the flight.

AIR FRANCE
Passengers with "high body mass" may receive a 25 percent discount on an extra seat, knowing that if it chooses to not buy the seat, it may risk not being able to fly.

JET BLUE
You are required to buy a second seat, and there are no refunds.

DELTA
The airline "works to accommodate" passengers with special needs. Upon request and availability, it will try to make sure the next seat is unoccupied. However, if the plane is full, you will most likely be asked to leave the flight and buy a second seat on the next available flight. (You can actually count on this being a fairly typical practice on most airlines.)

Take our poll: Should clinically obese passengers be required to buy an extra seat? (It's the fifth question down, but feel free to vote on the questions 1-4 too!)

And please tell us what you think about this, er, weighty matter.