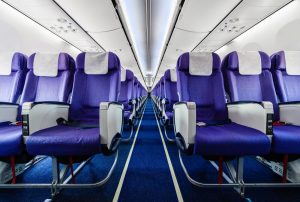 Anyone who has flown in economy class recently knows that inadequate legroom isn't the only problem. Seats are also too narrow to accommodate today's ever-inflating population. Unfortunately, unlike pitch information, airline seat width postings on SeatGuru (SmarterTravel's sister site) and similar sources don't help as much as they should, because airlines measure seat widths in different ways and the information they feed SeatGuru isn't as consistent as it might be.

Also, airlines can't adjust seat width as easily as pitch. Cabin dimensions limit width adjustments to large increments; after all, you can't have 8.3 seats per row. So to cut through the confusion, here's a quick, and necessarily approximate, guide to airline seat width.

Most new 777s and 787s are now delivered with tighter seating, and many airlines with the older, roomier seats are "upgrading" to the less comfortable standard.

RELATED: The 5 Rules of Reclining Your Airplane Seat

Among long-haul planes, the standard eight-across seats on A330/340s and seven-across seats on 767s are generally a bit wider than the common nine-across layouts on 787s and 10-across configurations on 747s and 777s. But watch out for the rare and exceedingly uncomfortable nine-across seats you find on a few A310/330 planes, including most on Air Transat and XL Airways France.

Among the narrow-body planes, seats on the A320 family are usually up to an inch wider than seats on the 737-757 family.

These guidelines are not absolute. Some lines, for example, elected to equip 767s and A320-family models with narrow 737-width seats and devote the extra space to the aisles. But in the absence of accurate data, they're about as much as you can find.

Read the original story: A Quick Guide to Airline Seat Width by Ed Perkins, who is a regular contributor to SmarterTravel.