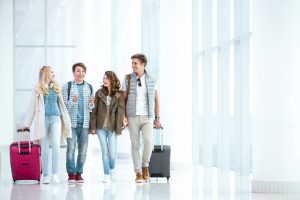 9 Surprising Things Other Passengers Are Thinking About Air Travel

This one you probably already knew, but we've got the proof. More than 92 percent of people polled in our survey feel that today’s air travel experience isn’t the best, but the majority of those travelers (63 percent) feel they can get by.

Ehh ... not in a good way. About three in four travelers feel that the current political climate is more stressful than air travel. We’re not taking sides here, but the data speaks for itself.

Would You Rather: Fly or Go to the DMV?

You have to answer! And if you say take a flight, you’re not unlike those surveyed. More than half would rather spend the day on a domestic flight than at the dentist (15.9 percent), preparing tax returns (11.9 percent), or at the DMV (8.5 percent).

Pre-Boarding Is Literally the Worst

As basic as that sounds, it's what travelers are saying. About half of travelers polled said pre-boarding, everything from checking-in and dealing with annoying security lines, is the most stressful part of air travel.

Fellow Passengers Can be a Pain in the …

Let’s not finish that sentence, but you get the point. More than 50 percent of travelers feel more respected by air personnel than their fellow passengers. I guess the next time I fly, I’ll make a note to thank the flight attendant when she gives me an extra nip or bag of chips.

What Happened to Manners?

Travelers also feel that a sick, coughing, or smelly passenger would most negatively effect their inflight experience. #TravelTip: Remember to shower and wear deodorant on your next flight.

But Passengers Aren’t as Rude as You Think

They actually aren’t—more than 65 percent of travelers said they don’t recline when they know there’s a passenger seated behind them. Also those that do recline, most (81 percent), do feel bad about it.

Overbooking Is Getting Old

We’ve seen it and you’ve seen it, dragging passengers off planes due to overbooking is just totally messed up. Travelers in our survey feel the same: 77 percent of travelers polled feel it should be illegal for airlines to overbook flights.

What Should Airlines Be Doing?

It’s a pretty even split if the government should regulate the inflight experience, with 58 percent saying they should and 42 percent saying they shouldn’t. If travelers could have an input on the inflight experience, about 40 percent of them said they would pay to have an entire row to themselves. More than 75 percent of travelers would like to see food, drink, and Wi-Fi free on all airlines. Airlines take note, because this is what the people want.

Squad Up for Southwest

Someone is doing travel right. Can you guess which airline was voted number one with 35 percent of the vote? Southwest once again. I guess the free snacks are what’s keeping them up on top—along with their competitive prices, the courtesy to not charge change fees, and their 24-hour penalty free cancel window. Delta came in second place with 21 percent of the vote, and yes, we're a little surprised. And of course Spirit came in dead last, not a single ounce of shock there.

Are you surprised? What else can airlines do to make your experience just a bit better? Let us know in the comments below.