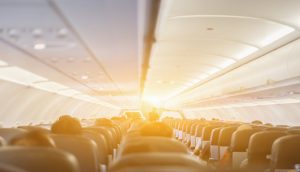 Over the past few months, the airline industry has made headlines many times, from overbooking gone wrong to the up-in-the-air (no pun intended) electronics ban. But just how terrible is air travel, really?

According to the Airfarewatchdog Annual State of Travel Survey, not as much as today's headline-generating, Tweet-storm-inducing political climate.

Almost all (92 percent) of the more than 4,000 travelers Airfarewatchdog surveyed agree that today's air-travel experience leaves a lot to be desired. Still, the general consensus is that air travel isn’t as bad as the headlines would have you believe. In fact, three-quarters of respondents feel that the political climate is more stressful than flying. And more than half would rather spend the day on a domestic flight than at the dentist (15.9 percent), preparing tax returns (11.9 percent), or at the DMV (8.5 percent).

What keeps fliers up at night?

Hint: It’s not the actual flight. Almost half of respondents (48.5 percent) say the pre-boarding process (checking in, going through security, and so on) is what creates the most stress. Researching and booking travel is a close second (27.8 percent). "Signing up for TSA PreCheck or Global Entry takes a lot of the sting out of the security lines," says George Hobica, President of Airfarewatchdog. "And, in many cases, paying a bit extra for priority TSA screening lines also helps ensure a more relaxed screening process."

Airline fees are another touchy subject for consumers. While these ancillary fees may help keep base fares in check, they’re still hated by just about everyone. The single most annoying fee is the change or cancellation fee, followed by carry-on, checked-baggage, and seat-selection fees. Travelers are least annoyed by Wi-Fi and blanket fees, despite the fact that a recent Hawaiian Airlines flight had to be diverted after a passenger became angry over needing to cough up $12 for a blanket.

Finally, the biggest worries when it comes to airplane seatmates are sitting next to someone who's sick/coughing (39.3 percent), has an unpleasant body odor (28 percent), or is overweight (13.6 percent).

What could airlines do to make things better?

While there are areas of opportunity abound, the one that tops them is in-flight comfort. In fact, as hated as airline fees are, almost 40 percent of respondents say they’d pay extra to get an entire row to themselves. It’s clear that travelers value not only their space, but others’ as well: The majority (almost 65 percent) refuse to recline their seat into a fellow passenger’s lap because they feel bad.

Do any of these results shock you? Do you agree with them? What do you think could be done to better the skies? Let us know in the comments below.