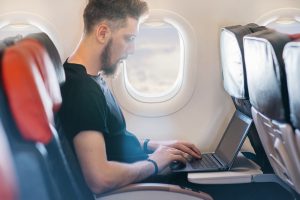 Will We See a Total Ban on Personal Electronics in Airline Cabins?

When the electronics ban was introduced recently for nonstop flights from various Middle Eastern countries to the U.S. and Britain, there was much understandable confusion. Why wasn’t it a universal ban? Why was it only in one direction (inbound to the U.S. and U.K.). Why was it only on nonstop flights? Why was it applied to some Muslim-majority countries and not others? And why was it suddenly “safe” for the electronics, with their sometimes unstable lithium-ion batteries, to be stowed in baggage holds if they were so dangerous in the cabin?

Were the U.S. and Britain targeting certain religious groups, and certain airlines such as Etihad, Emirates, and Qatar, since they were the only ones flying nonstop flights from the affected countries, much to the delight of Air France, Delta, and other airlines that would benefit from passengers booking flights from the Middle East via Europe or other connections?

That conspiracy theory sounded plausible to some, but it’s nonsense. First, the people who try to keep us safe when we fly would have loved to apply a universal ban, and perhaps they still will, but doing so would have crippled the aviation industry if imposed without warning all at once, so they did the next best thing and applied the ban selectively to the countries where, they believed, terrorists would most likely begin their journeys. Yes, it was a form of profiling, I suppose.

Second, the airlines that might “benefit” from the ban (those without nonstop flights from the affected countries) aren’t especially happy, either. As Alex Cruz, the CEO of British Airways explained to me recently, “we do not want to have 200 laptop and other electronic items in our cargo holds.”  That’s because lithium-ion batteries are notorious for instability. Plus, airlines would have to (and may still have to, one day) hire hundreds of new check-in agents and baggage handlers to process all those bags. The aviation industry was simply not ready for this.  Plus, the airlines will be seeing more claims for lost, damaged, and stolen property (although they notoriously refuse to be liable for “valuables,” which includes electronics).

As to why it’s “safer” for electronics to be stowed rather than carried in the cabin, the theory is that while there might not be enough room to stuff the components of a bomb (power supply, timer, transmitter, explosive material, etc.) into just one piece of equipment, a terrorist could assemble a device from components stuffed into two or more pieces (a camera, a laptop, a portable printer, and a mobile phone) if allowed to carry all those items in the cabin.

It’s probably only a matter of time before a laptop bomb plot is either thwarted at the last minute or it succeeds (it’s already happened, actually, but because it was a Somali airline and the only injury was the terrorist himself, who was sucked out of the plane, which landed safely, few noticed); if it happens again, however, we can expect a full electronics ban to be implemented.

How fliers and airlines will cope is anyone’s guess. At the very least, airlines will have to hire more people to manage checked bags.

Perhaps electronics manufacturers will come up with a substitute for lithium-ion batteries, making it safer to stow them beneath the plane. Perhaps fliers will once again chat with seatmates (I sat next to a NASA astronaut on my last flight and we chatted and it wasn’t a torture) or read an improving book. More likely, Panasonic and other in-flight entertainment manufacturers will build software and keyboards into their systems, so every seat will be a workstation (that is coming, actually). You’ll bring your files and data on a memory stick, plug it into the IFE, and work, or use the plane’s WiFi to work in the cloud (super fast WiFi is coming and will soon be universal; British Airways recently announced that it will soon provide next-gen WiFi on all its planes). Or just write that vitally important memo that just can’t wait on your mobile phone.

But meanwhile, we should all just chill. Stop looking for conspiracy theories when people try to keep us safe. Make sure you buy your flight with a credit card that covers lost or damaged laptops and other electronics (the American Express Platinum Card, for instance).

But most importantly, stop whining because you can’t be “productive” while flying. You need a rest; you deserve a rest, and a long flight is the perfect time to contemplate, recharge, and relax. Sans laptop if it comes to that.