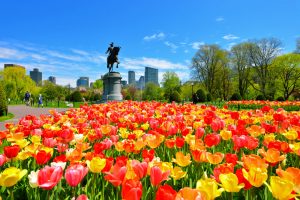 Moderate temperatures, smaller crowds, and better hotel and bed and breakfast deals make spring a great time to visit some of the country's most spectacular cities. Plus, many destinations celebrate the season with annual events, exciting festivals, and breathtaking flower displays. These 10 U.S. cities offer all of these things and more, and each is an ideal spot to visit when spring blooms.

Disclosure: This sponsored post was written by Airfarewatchdog on behalf of Dunhill Travel Deals.

As New England shakes off the winter chill, Boston springs to life with major events like the Boston Marathon, opening day for the Red Sox, and outdoor spaces in full bloom. Fewer people visit in the spring than in the summer and fall, which means lower prices on Boston hotels and easier access to popular spots.

Spend the day surrounded by flowers while watching the iconic Swan Boats in the Boston Public Garden, or take time to explore the arts and activities along the Rose Kennedy Greenway—15 acres of public parkland in the heart of the city. Baseball is also in full swing at America’s oldest major league ballpark, Fenway Park.

What better time to visit the City of Roses than when it's in full bloom? Portland in spring is unlike anywhere else, as the variety of trees, flowers, and plants (think rhododendrons, azaleas, cherry trees, and, you guessed it, roses) emerge and paint the streets in a myriad of colors.

Though there is still a possibility of showers, lower prices on hotels in Portland more than make up for having to carry an umbrella. The annual Portland Rose Festival kicks off in late May, and is the largest festival of the year, making it a special time to visit.

Spring is an incredibly popular time to visit Savannah, and for good reason: The weather is cooler than in the stifling summer, the city’s iconic squares and parks are beautifully blooming, and annual events give the city a lively atmosphere.

Among the top springtime events in Savannah are the self-guided Springtime House and Garden Tours; Georgia’s largest music festival, the Savannah Music Festival; and the River Street Seafood Fest. The best spring Savannah hotel deals come early and late in the season.

San Diego is popular year-round, but you can largely avoid the crowds at the major attractions like the San Diego Zoo, Legoland California, and the Air and Space Museum while taking advantage of lower prices on hotels in San Diego and cooler weather in the spring.

Balboa Park is particularly beautiful in springtime, as the cherry blossom trees are in full bloom. And if the skies turn gray with spring showers, simply visit some of the city’s indoor attractions instead of heading to the beach. Spring break is also a very lively time for San Diego.

Spring is a cool time to visit Orlando, and not just because of the temperature. The season offers attractive prices on hotels in Orlando and far fewer crowds than summer. Major theme parks, such as Walt Disney World and Universal Studios Florida, see shorter lines, which makes it easier to see more during your stay.

Epcot also hosts an annual International Garden and Flower Festival that may be reason enough to visit. Spring break is a popular time for college students, too.

It’s impossible not to let the good times roll any time of year in New Orleans, but springtime equals outdoor music playing in the streets, happy hours in open-air courtyards, major festivals (including Jazz Fest), crawfish season, and worthwhile deals on the best hotels in New Orleans.

You'll enjoy cooler temperatures than the hotter-than-hot summers, making it easy to explore the city comfortably by foot, take part in outdoor activities and parades, and soak up the sun with a picnic in the park. The city can be particularly popular during Spring Break, which tends to get a bit rowdy, especially near Bourbon Street. Plan accordingly if you are looking for a less lively visit.

Chicago can get chilly in the spring (it is the Windy City, after all), it's still a great time to visit. If you don’t mind packing a few extra layers (that you may never even use), you can save a pretty penny on Chicago hotels and avoid the large crowds that come during the summer months.

Many of the city’s green spaces burst into color and are well worth exploring in the spring. There are plenty of seasonal activities, such as the Lincoln Park Conservatory Spring Flower Show, to keep you busy, so be sure to plan ahead before you book.

It's a good bet that spring is a fantastic time to visit Las Vegas. Temperatures average in the 70s and there are fewer crowds to deal with than during peak season. The city is a hot spot year-round, but spring makes it easy to find great Las Vegas hotel deals, nab a good seat by the pool, get tickets to popular performances, skip lines at the top attractions, snag a reservation at one of the many five-star restaurants, and explore the Strip comfortably by foot. Don’t miss Vegas Uncork’d, the annual four-day food and wine festival that happens every spring.

This charming Southern city is a popular spot among food lovers, history fanatics, and entertainment seekers throughout the year, but the spring is a particularly fun time to visit. With more manageable temperatures (i.e., less hot and sticky humidity) than summer, spring also sees fewer visitors, which equals Charleston hotel deals and easier access to major attractions.

Don’t miss the exquisite flower displays at the annual Festival of House and Gardens, which includes tours in the Old and Historic Districts. The Waterfront Park is a fantastic spot to watch the setting sun from one of its many swings.

Austin is a prime springtime destination thanks to its incredibly popular film and music festival, South by Southwest (SXSW), as well as other major food and art events. Beyond that, though, there are plenty of other reasons to pay a visit to this Southern city. Spring temperatures average in the 70s, making it easy to explore without melting in the Texas heat.

And depending on when you visit in the spring—i.e., not when there is a super popular festival happening—you can also snag a good Texas hotel deal. Austin can be a popular spot for Spring Break, so plan accordingly depending on your interests.