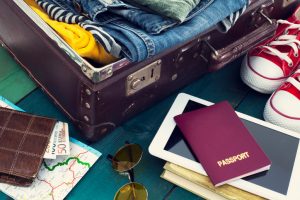 Why Do We Dress so Badly When We Fly?

Twitter exploded over the weekend with negative comments directed at United Airlines when a gate agent refused to board a couple of young girls flying for free on a “pass,” a common perk offered to airline employees and their dependents. The offense? Wearing leggings, which, the employees should have known, contravene United’s published policy concerning free travel.

I, too, have been denied boarding for a fashion offense. For two years, I flew on passes on Eastern Air Lines (remember them?) as a contractor for the Shuttle. Every month I’d be handed a stack of coupons that allowed me to fly standby in first class anywhere in the world Eastern flew. Included with these was a slip of paper stating the company’s dress code: men had to wear a suit and tie; ladies had to wear a dress. One day I showed up for boarding and forgot to wear a tie. The gate agent put me in economy class. When I protested he scolded me, “The way you’re dressed you don’t even deserve to fly at all!” (The same thing happened years later on British Airways, but that time I had a tie in my carry-on bag.)

All that was decades ago; but today, airlines still enforce (albeit watered down) dress codes for employees and their dependents. And sometimes, for regular passengers as well

Perhaps as a result of my airline days, and because my mom dressed me up like Little Lord Fauntleroy when we flew as a family, even today I dress up a bit. And why not? I like to get compliments and I don’t like to look like an air travel clone.

Last week I flew from my home in Los Angeles to Seattle and then to London, and back to L.A. via New York on various airlines. Rather than leave my nice clothes in the closet where the moths could get at them, I wore them on the plane (when a trip is going to require business attire at some point, I wear it on the plane rather than stuffing everything in my carry-on where it will get wrinkled). “Nice blazer!” a flight attendant chirped as I boarded one flight last week. Waiting in line in security at Heathrow, a fellow passenger commented, “love that color on you,” referring to my scarf. Even a TSA agent commented on my outfit (okay, I was really styling on the that trip).

And then there was the time I was paged while waiting for a United flight from New York to L.A. Expecting to be bumped since I have never had status on United, I was instead upgraded to first class. I was the only person in the lounge wearing a suit…and tie. Everyone else was dressed like Richard Simmons. Or worse.

Look, I realize that we all like to dress comfortably when we fly, especially now that air travel has become less comfortable. But I feel like some passengers go out of their way to dress like…ok, I’m going to say it…like slobs. I see men my age in the airports in what I call “middle-aged male air travel drag”: ratty denim jeans, a t-shirt, and the ubiquitous baseball cap, maybe flip flops. Give it a rest, men! It is not a sexy look after about, oh, age 29. Surely these men have some nice slacks and a polo shirt hanging in their closets. Trust me, you will not be any less comfortable flying in slacks and a polo shirt than in a pair of denim jeans (memo: jeans are actually less comfortable than Dockers).

One thing I will say is that usually when these stories pop up on social media it’s the women who are targets, and that seems a bit sexist. What about the men in skimpy tank tops sprouting copious amounts of armpit hair? Who wants to see that outside of the gym (hey, I don’t particularly want to see it inside the gym)? This blog post from The Quint, an Indian website, makes some valid points, showing that the debate is international.

Who appointed me a chief inspector of the airline fashion police? No one. I’m just saying, you will feel better about yourself, and you will get more respect from airline personnel and some fellow passengers, if you make at least a little sartorial effort while flying. And if you push the rules too far, you will be denied boarding, whether you’re an airline brat or not. And I’m okay with that.