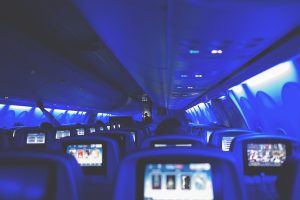 The Future of Premium Economy Seating Is Now

In late 2016, American Airlines announced that it would offer a true premium economy service starting in 2017—the first of the giant U.S. airlines to do so. Given the "me, too" approach of the big three, you can expect Delta and United to follow in due course; probably in 2017. As a result, the giant U.S. lines will finally be on a par with Air Canada and the many big European and Pacific lines that have operated premium economy for decades.

The history of premium economy is an interesting study in airline competition. It had its genesis, oddly enough, in the mid-80s when Sir Richard Branson upped the ante in business class by offering sleeper-style seats rather than the then-standard recliners in his startup line Virgin Atlantic. The giant lines couldn't afford to let Virgin keep a major edge in product quality, so they gradually morphed their older business class cabins first with seats that reclined up to 170 degrees or so, at an angle to the floor, and eventually to today's de-facto flatbed standard.

The ever-growing opulence of business class, and its consequent ever-growing fares, created a huge product and fare gap between business class and the steadily worsening "main cabin" economy class. In 1991, EVA, then a little-known airline based in Taiwan, filled that gap with premium economy. It was about like business class had been a decade earlier. Virgin Atlantic copied the idea in 1992, and many long-haul European and Pacific lines gradually did, as well.

Current "true" premium economy remains very much as it was when EVA started it. It is confined almost exclusively to long-haul, wide-body planes. Seats are roomier and cabin service is upgraded over regular economy. The current norm for true business class is seat rows at 38-inch pitch, compared with 28 to 31 inches for most economy services. Fewer seats per row mean seats are wider: Although SeatGuru posts relatively small width differences of one to two inches on most planes, premium economy's double armrests and other spacing mean that its seats actually provide three to four more inches of shoulder-level width.

U.S. lines did not initially adopt true premium economy. Instead, in response largely to complaints about ever increasing crowding from frequent travelers, United modified its main cabins to accommodate a few rows of ordinary economy economy seats with an additional four to six inches of front-to-rear space. Lacking an official industry term, let's call this product "stretched economy," but a few lines incorrectly label it "premium economy."

Although competitors were initially skeptical, when they saw United's experiment succeed, Air Canada Rouge, American, Delta, Frontier, Hawaiian, and WestJet gradually adopted the idea; JetBlue had it from the beginning, and Alaska has announced it will adopt it in 2017. For now, Southwest is a holdout. Among the large foreign-based lines, Aeromexico, Air China, China Southern (all but 777-300ER), ElAl, Finnair, KLM, Latam, and Philippine also adopted stretched economy rather than true premium. And many airlines sell extra-legroom exit-row and bulkhead seats as optional extras.

Unlike true premium economy, stretched economy works in narrow-body planes as well as in wide-bodies, and some lines apply it to regional flights. Mostly, cabin service is the same as in regular economy, although Delta adds some improvements. Fares are usually priced dynamically, and the surcharge over regular economy varies by route, time of day, and season.

On many lines, top-level frequent flyers and travelers on full-fare economy tickets get in without paying extra. And surcharges over cheap tickets seldom go more than $100 or so for domestic trips, a bit more for intercontinental trips. It's a lot less expensive than true premium economy, but it's a much poorer product, retaining as it does the standard economy seats that are too narrow to accommodate current travelers comfortably.

These days, the norms for the "hard product" in premium economy are pretty consistent. Most lines install seats at 38-inch pitch, with the number of seats in each row depending on the plane model:

All of these configurations result in seats that are about three to four inches wider than corresponding economy seats on most airlines.

There's no way to compare the various lines' "soft" product: meals, cabin service, and such. In general, however, the soft product will be substantially better than the bottom-end economy product. No surprise there.

All this extra comes at a price. I compiled both the cheapest economy and premium economy fares for 21 airlines on a primary intercontinental route touching the U.S. or Canada for travel in mid-July, far enough in the future to avoid distortions from current promotions and sales. On those lines, the fare surcharge over regular economy ranges from ranged from 37% to 264%, with an average of 78%. When I removed the two fare findings that seemed out of whack, the average premium reduced to 62%, still a stiff price hike.

The figures show why premium economy is still a small part of the total picture. Air France has touted its premium economy as "40% more room," and "40% more room for 62% more money" is not an overwhelming value proposition. The main appeal is probably to some combination of business travelers whose expense account can't handle business class plus a few very upscale leisure travelers.

RELATED: What to Do When an Airline Tries to Screw You

Among the major international players, it is something of a surprise to see that none of the big Gulf lines offers either premium or stretched economy. Emirates has announced, however, that it will likely install premium economy in either 2017 or 2018, and as Emirates goes, so will likely go the others. Other surprise holdouts include Aer Lingus, Asiana, Iberia, Korean, and South African.

As noted, American is rolling out its premium economy in new 787s right now. It seems to be planning to keep stretched economy, as well. It will add premium economy to its other wide-body planes over the next several years. Delta and United will almost surely copy American. There's no telling what Southwest will do, and Alaska hasn't decided yet what to do with Virgin America. But it's hard to see how the big current international holdouts can avoid moving to premium economy.

RELATED: 8 Things to Consider Before Booking a Flight

I selected prices for comparison for a time far in the future to limit the influence of current promotions. But the truth is that between now and the summer many airlines will, in fact, engage in promotions, in all three classes. Your best bet at any given time may well be different from what you'd select now.

The premium economy "hard product" showed a remarkable consistency among the various lines. But I found some anomalies:

No matter what any individual line does, 2017 should see some substantial expansion of premium economy. And the take-away is that it's a great product if you can spring for it—especially if it's on sale. It's what flying should really be like.