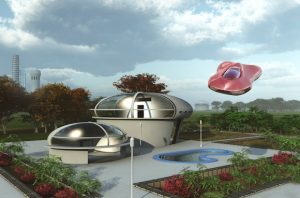 As I sit here in Los Angeles listening to gardeners operating their infernal leaf blowers with the occasional television news or LAPD helicopter adding to the cacophony overhead, I can only imagine the noise we will suffer through if Airbus Group's latest vision reaches fruition. According to Reuters the aerospace company, the world's largest manufacturers of helicopters, "plans to test a prototype for a self-piloted flying car, as a way of avoiding gridlock on city roads, by the end of the year." Consider: hundreds if not thousands of individual helicopters, guided by GPS, radar and lasers, plying the skies, each one emitting a loud, droning, whirring buzz.

Is this just another pie-in-the-sky Airbus whim, like its previous research into "standing room" seating on jets, an idea it patented in 2014, but which will, we hope, never happen?

If Amazon's experiments with package delivery by drone also become a thing we could see some very crowded, and very noisy, skies. Let's hope neither concept becomes a reality unless both companies can figure out how to provide these technologies as silently as George Jetson's aerocar flies around Orbit City.