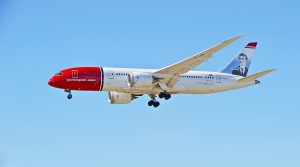 Norwegian has been making a lot of noise about possible flights from Edinburgh to the U.S. for $69. Is that real, or is it just hype? Actually, it's some of both.

First and foremost, it's feasible. Next summer, Norwegian will take delivery of some new Boeing 737MAX planes—ordinary 737s with new engines that give it enough range for transatlantic flights. And seat-mile costs of the 737MAX will be among the lowest of any planes. But even with the 737MAX, Norwegian will have to take in more than $69 each way to avoid huge losses. It will pad its take three ways:

Clearly, for trips from the U.K. to the U.S., that $69 fare does not include the onerous British Air Passenger Duty. It's currently set at £67 (about $84) that is payable for flights outbound from any U.K. airport, but not on inbound flights.

So far, enough has been leaked to verify that the initial route will be from Edinburgh to Stewart Field, Newburgh, New York. Although Newburgh is run by the Port Authority of New York and New Jersey, the same folks who run JFK, Newark, and LaGuardia, it has no system for getting people from there to New York City quickly and easily. Neither of the current options is ideal:

According to press reports, Stewart is trying to set up an express bus to Manhattan, but it must necessarily take around 90 minutes—more with heavy traffic or intermediate stops.

Norwegian is also considering flights to/from the Boston area. Again, however, it will use a remote airport (either Providence or Manchester) rather than close-in but expensive Boston Logan.

One point of speculation is whether Norwegian is counting on Scotland to remove or cut that Air Passenger Duty. Scotland's parliament has been making noises about doing so, but even if it does, the cut would probably not take place until 2018.

The take away, at least for now, is that you'll be able to fly at very low fares between the New York or Boston areas and the U.K. on Norwegian this coming summer. But you'll pay a lot more than $138 round-trip, and you'll find comparatively few seats, to/from inconvenient airports, with lots of fees.

Ed Perkins has been writing about travel for more than three decades. The founding editor of the Consumer Reports Travel Letter, he continues to inform travelers and fight consumer abuses every day at SmarterTravel.