Taste and Prost Your Way Through Germany's Off-the-Beaten-Track

Bratwurst, currywurst, and beer may come to mind when you think about Germany. But there’s more to the country’s cuisine than just grabbing a pint and eating sausage for breakfast, lunch, and dinner. While farm-to-table might be all the rage these days, the regional delicacies of Germany have been locally-sourced for centuries. Get ready to test your palate (and stretch your pants) with these 14 food, drink, and activity must-dos that will help you truly experience all the culinary nuances of the country.

Germany knows beer. In 1143, the Bavarian city of Augsburg passed the first beer purity law, and has been making brewing history ever since. Augsburg is also home to Riegele brewery, one of the world's oldest breweries. Of note to Americans is that the brewery recently partnered with U.S.-based Sierra Nevada Brewing Co. to brew a new Oktoberfest beer.

Beer lovers, meanwhile, will find a haven in Heidelberg, which is home to Germany's oldest university. The large student population means there's an incredible number of bars serving a variety of German beers. Have a night on the town like a local—with a pub crawl around Heidelberg. It's one of the best ways to try a variety of German beers, while also sightseeing: bars like Zum Roten Ochsen have had guests including Marilyn Monroe and Mark Twain walk through its doors. 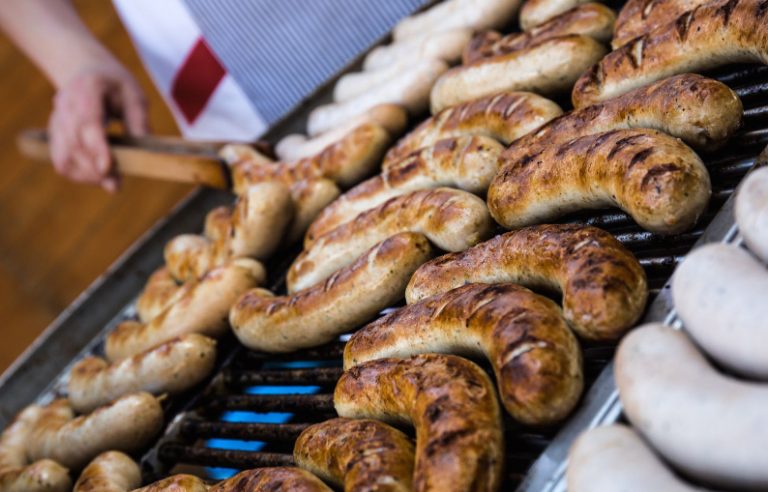 Get Serious About Sausage

Sausage is at the center of its own gastronomic universe in Germany—and it's a delicious way to get to know the country's varied regions.

Head to one of Germany's most intact medieval towns, Erfurt, for a classic Thuringia sausage, a blend of minced pork and spices inspired by a recipe dating back to 1404-and kept secret amongst the butchers of the region. Pair it with Thuringian potato dumplings, made from a mix of raw grated potatoes and boiled and mashed potatoes with croutons.

Regensburg is famous for its stone bridge, built around 1146, though it's equally as famous for its sausages. The variety of Bavarian wursts are often accompanied by Knodel, or dumplings made from dough of either potato or bread and sometimes filled with meat. The Historic Sausage Kitchen, or Wurstkuchl, is in a 900 year-old building and sells around 6,000 sausages daily. Sauerkraut, homemade mustard, and regional beer accompany your meal. The tavern fueled stonemasons and dockers during the Middle Ages, but the recipe is still a closely guarded secret.

In its 2,000-year history, the town of Koblenz has had plenty of time to perfect its brand of Rhineland cuisine. Don't leave the area without trying Rheinischer Doppekooche, a baked potato cake made from grated potatoes, minced onions, egg, and spices, topped with sausage. Also worth a taste is Rheinischer Sauerbraten, usually made by marinating and simmering a beef roast in a sour-sweet mixture. The process takes days, but worth the wait.

In the Rheinhessen wine growing region, Weck, Worscht, and Woi—bread, sausage, and wine—is a perfectly acceptable meal. Often referred to as WWW, the trifecta is one of Mainz's claims to fame. Indulge with the locals at the Mainzer Marktfruestueck, or Mainz Market Breakfast, which is held during the city's Farmer's Market every Saturday.

The distance between farm and table is short in neighboring cities like Muenster and Osnabrueck—and both cities offer the chance to sample the bounty of the land and the enduring culinary traditions of the people.

Muenster is a capital of Westphalian cuisine, a down-to-earth style that, in its simplicity, packs a lot of flavor. Meat heavy dishes like Muensterland ragout are just as common as more vegetable-based offerings, such as stews with cabbage, turnip greens, and beans. Pumpernickel bread and, of course, regional beers, complement each meal. For a hearty serving of regional Westphalian specialties, make lunch or dinner reservations at Altes Gasthaus Leve, Muenster's oldest inn, has operated since 1607.

Nearby, Osnabrueck lies in Lower Saxony, a region characterized by its agriculture, farming and old-fashioned craft activities. Enjoy freshly-brewed drinks at the many small coffee roasting establishments that have found new life in this 1,200 years-old city. For a lauded sampling of the region's bounty, try La Vie, the three Michelin starred restaurant spearheaded by Thomas Buhner, one of Germany's top chefs. Set menus feature dishes such as a creme brulee from goose liver with peach chutney.

Get a Taste of History

Germany's cuisine is also influenced by its neighbors and shaped by its history.

Taste the crossroads of Dutch and German styles in the state of Brandenburg, home to the city of Potsdam. A strong focus on potato-based dishes is complemented by the region's wilderness, where chanterelles, chestnuts, and porcini mushrooms grow. Lakes and rivers add protein in the form of pike and carp, among other fishes. Sourcing food locally isn't just a marketing trick here, either. Around 80 percent of the vegetables, meats, fish, and fruits consumed in the state are locally grown. Explore the Dutch quarter for a unique spin on cuisine. The slice of Holland in Germany extends beyond cafes to the shops, bars, and building architecture, too.

The former East Germany retains some of its history in its food—the city of Rostock has cuisine unique to the former German Democratic Republic (GDR). The town's Rostocker Brauerei brews several varieties of beer worth trying, including a pilsner and dark larger. For more than 40 years, the Broiler Grill House at the 5-star Hotel Neptun has served crispy chicken with a special homemade sauce and fries. Insiders take theirs to go and picnic on area beaches. The restaurant's dining room, with its authentic 1970s East German style, is like a time capsule from the GDR.

Winemaking in Germany dates back more than a thousand years. Discover its rich viticultural history through tastings, food pairings, and wine-centric celebrations.

As the main city in the Franconian wine country, Wuerzburg is the place to try the dry white wines for which the region is famous. Here, winemaking dates back 1,200 years and more than 15,000 acres of land are devoted to the industry. The 700 year-old Buergerspital wine estate is home of the Bocksbeutel-shaped wine bottle, a flattened, round bottle. This bottle became an indicator of quality wine back in 1726 so customers could distinguish between good and bad wine.

Toast to only-in-Germany wine and food pairings in the city of Trier, part of the Mosel wine region. Pair local wines with hearty dishes like "Himmel und Erd" or Heaven and Earth, a blend of potatoes, applesauce, and bacon that's often served alongside blood sausage. The Kesselstatt Wine Tavern serves regional food and fine wine in an old farmhouse. Inside, you can see the old wine press with floor-to-ceiling wine racks decorating the wine bar. Alongside popular Rieslings, the tavern serves all 70 of the Vineyard Count von Kesselstatt wines.

Each year, for 10 days in September, the Rheingau Wine Festival brings all the best wines from Rheingau winemakers to downtown Wiesbaden. In addition to local reds, whites, roses, and sekts (sparkling wine), there are a range of food vendors serving cheese, flammkuchen, wursts, and more. Live music and other entertainment makes it easy to spend the entire day here.