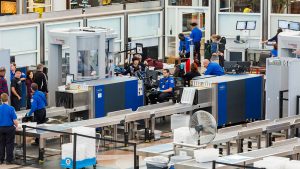 It's been a long time in coming, but PreCheck, the TSA's trusted-traveler program, is now available to passengers flying on Frontiers Airlines.

PreCheck-enrolled travelers may access expedited screening lanes in more than 180 U.S. airports, with no need to their remove shoes, laptops, liquids, belts and light jackets. According to the TSA, 97 percent of PreCheck passengers cleared security in 5 minutes or less during August.

Effective this week, Frontier passengers' PreCheck status will be printed on boarding passes printed at home or at the airport and mobile boarding passes.

The application fee for PreCheck is $85. Once approved, status remains in effect for five years.

The endless security lines of earlier this summer have mostly disappeared, as a result of beefed-up TSA staffing and revised screening policies and procedures. Even with more modest time savings, however, the no-hassle screening that PreCheck passengers receive makes the service a worthwhile expenditure for even infrequent flyers.

Are you a PreCheck flyer?

Read the original story: PreCheck Now Available When Flying 19 Airlines by Tim Winship, who is a regular contributor to SmarterTravel.