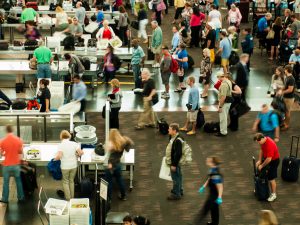 The TSA and American Airlines are about to launch a joint test of new, partially automated screening checkpoints at a handful of the airline's hub airports.

According to release from American, the tests include:

As you can see, none of these "innovations," as American's release calls them, are particularly significant. Automated bin belts are already in use in Europe, and bigger bins are just, well, bigger. No one is reinventing the wheel here.

But in combination, incremental improvements like these might have an impact. Simply keeping checkpoints moving smoothly will both speed up the process and reduce traveler frustration. After all, what's more aggravating than standing in line with no shoes on while you wait for more the bins to be replenished?

The TSA is also going to test the use of CT scanners at security checkpoints. CT scanners are currently used to screen checked bags, and the hope is that using them on carry-ons could allow travelers to keep liquids, gels, aerosols and laptops in their bags at all times. CT scanners will be tested at Phoenix Sky Harbor airport later in 2016.

Unlike some of the smaller tests outlined above, CT scanners could drastically improve the checkpoint screening process. Imagine: Simply dropping your bag on a conveyor belt, removing your shoes, and ... that's it! Flying hasn't been that simple since the '90s.

This is the sort of screening technology people have been clamoring for since the early 2000s. As the TSA packed rules and restrictions, its screening process grew unwieldy and confusing, especially for people who don't fly often. Finding a screening solution that simplifies this process for travelers while maintaining the TSA's policies would be a godsend to frustrated travelers, airlines, and airport officials, so let's hope this proves to be a viable option.

Read the original story: TSA Testing Potentially Time-Saving Changes by Carl Unger, who is a regular contributor to SmarterTravel.