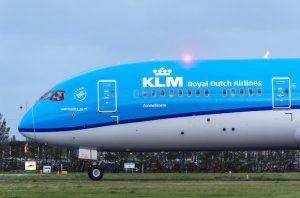 From KLM: Carbon Offsets for the Eco-Conscious Traveler

Should we feel guilty when we fly somewhere? Each year, airlines contribute 2-3 % of CO2 emissions worldwide, and since many leisure airplane trips are discretionary, should we—or should airlines—do something to offset the carbon that flying creates?

Some airlines think so. For example, KLM, the Dutch national carrier, has made a concerted effort to reduce its carbon footprint. The airline is adding 21 fuel-efficient Boeing Dreamliners, which use up to 20% less fuel; it’s replacing gas-powered ground vehicles with electrics; buying new lighter onboard food carts; serving inflight meals made with sustainably grown ingredients; and perhaps most interestingly, testing biofuels, which produce 80% less CO2 than kerosene, to power jet engines.

Bio jet fuel, made from sustainably-grown non-food crops, is far more expensive than kerosene, which could lead to higher fares. To offset the extra cost, KLM is working with corporate sponsors willing to pay these higher fares, and encourages other passengers to pay a small fee, which goes not to buy biofuel but rather to purchase fuel-efficient cooking stoves that it distributes to citizens in the developing world. Because these stoves use less 40% less fuel, they produce less CO2 and they save the environment in other ways (the stoves still use charcoal, but less charcoal means fewer trees cut down).

The carbon offset fee used to buy these stoves varies per passenger per flight, but can be as little as 55 cents up to $15 or so for longer flights.

I like to think that KLM is a leader in fighting carbon emissions because the country lies a meter below sea level, and the last thing it needs is for sea levels to rise even higher. But Inka Pieter, KLM’s director for environmental strategy, suggests otherwise: “We are citizens of the world, not just of Holland. We have a responsibility to act as such.”

As a consumer, there are other things you can do to reduce your carbon emissions, of course, such as choosing to fly in a plane that uses less fuel than older models, for example the Boeing 787 or Airbus A350.

Or make an effort to work at home for a few extra days, or bike to work or take public transit the week before your flight. But don’t just stay home. After all, when you’re on vacation you’re not driving to work or going on shopping errands, so, after all, you’re probably already offsetting the carbon produced by your flight.