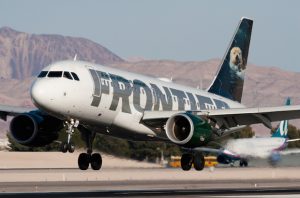 Frontier used to be a pretty decent airline, offering a product that felt a bit like JetBlue or Southwest – a good fare to where you needed to go without making you feel too bad about yourself. Times change, however, airlines change – in recent years, the Denver-based flyer had started to feel like a Spirit wannabe: All of the unbundledness and most of the discomfort, with none of the honesty. Frontier was having a midlife crisis. If you didn't have much reason to be flying within its relatively limited network, your flight paths probably wouldn't cross all that often and that would have been completely okay.

Clearly, plenty of consumers were fine with this, enough to make Frontier have second thoughts about its decision to strip down, because now they've decided that what passengers really want is more stuff again. More stuff, at – of course! -  a reasonable price. Say hello to "The Works."

Just like you said goodbye to advance seat assignments or free carry-on and checked baggage, now they're offering these and other benefits back to you for $49 and up each way, based on a round-trip purchase. Depending on how far you fly, it can get a little expensive, but we're talking about an airline that often offers base fares for as little as $19 or $20 each way. It doesn't take a rocket scientist to draw the conclusion that on some routes, this may be a better bargain for the buck than most other airlines – and not just the ones in its competitive set. With the airline rolling out all kinds of new routes in 2016, Frontier deserves a closer look. Let's do just that, shall we?

What is The Works?

It's a hefty little package of amenities that takes benefits other airlines charge a pretty penny for, wraps them up neatly in a bow and puts them on the shelf for anyone to purchase starting at just $49 each way. For your $49 (and up), you get full refundability, no change fees, the option to select your seat, a carry-on bag, a checked bag and priority boarding. As previously stated, providing the base fare and the package are on the lower end for your route, this makes it a rather competitive alternative to the likes of Spirit or Southwest.

Just how is it better than Spirit?

Simply put, what Frontier is giving you for as little as $49 could easily cost double that with Spirit. Any further questions? (Read our guide to surviving Spirit, here.)

Apart from the option to select your seat – something Southwest has never offered – the rest of Frontier's "The Works" package is stuff that you either get standard with each Southwest fare purchased or with their Early Bird service ($15 each way). Frontier's move makes them more competitive with Southwest – if the bundled cost with Frontier rings in lower than Southwest, go with Frontier and see how you like it.

What are the downsides of flying Frontier?

Like a teenager who's been through one too many phases, Frontier's closet is filled with a rather diverse mix of product – sometimes you'll get on one of their planes to find seatback televisions and very-nearly comfortable seats. Other times you'll find narrow, joyless, cramped cattle cars that are to be endured, not enjoyed. You won't really know until you get there, either.

Don’t all of Frontier's flights route you through Denver?

Check out their route map – you'd be surprised at what the airline's been up to lately. Philadelphia, Orlando, Atlanta, Las Vegas, Cincinnati, San Francisco – you name it, Frontier's coming and going to all sorts of places from all sorts of cities. In 2016 alone, the airline is adding 42 new routes and bulking up service in places like Nashville, Kansas City and Austin.

The same rules would apply here as they would on Spirit – unless this is a short weekend trip where you're not bringing a bunch of bags and don't require a block of seats for your extended family, you will find that the a la carte costs start to rack up fairly quickly, making your choice to fly a relatively bare bones airline to save a few bucks not a very smart one. Tread carefully.