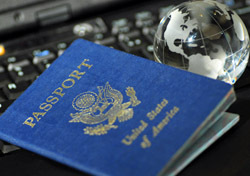 Why You Need to Renew Your Passport Right Now

If you have a U.S. passport that's expiring soon, the State Department urges you to renew it as soon as possible. Officials are predicting a surge in demand this year as millions of 10-year passports issued in 2006 and 2007 expire.

After the Western Hemisphere Travel Initiative (which prevented citizens in the United States, Canada, Mexico, and Bermuda from entering or leaving the U.S. without a passport) went into effect nearly a decade ago, passport wait times increased along with the number of applications.

Applying for your passport renewal soon will help alleviate the congestion expected later in the year.

RELATED: The Best Way to Get a Passport in a Hurry

The Real ID Act is also contributing to the influx. As of January 22, 2018, residents of states that still have not complied with the Real ID ACT will need a passport or alternate form of ID in order to board domestic flights.

As it stands, passport renewals in 2016 will take about six weeks or longer to process (up from four weeks last year). Planning ahead is key.

Know your expiration date, as well as your children's (if this applies), since passports for children under 16 expire every five years.

It's also important to know the passport validity restrictions in foreign countries, especially if yours expires soon and you plan on traveling abroad.

RELATED: Everything You Need to Know About Passports

And if your passport runs out of pages, you'll have to order a new one. As of this year, the State Department has discontinued the 24-page insertions once available for existing passport in an effort to improve security. U.S. citizens can now choose between a 28- or 52-page passport.

Bottom line: If you want to avoid being left without a passport on your next trip, don't wait.

Read the original story: Why You Need to Renew Your Passport Right Now by Olivia Briggs, who is a regular contributor to SmarterTravel.