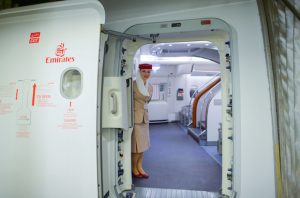 Effective Feb. 11, 2016, the Atlanta-based airline will no longer fly to Dubai thanks to "overcapacity on U.S. routes to the Middle East operated by government-owned and heavily subsidized airlines, and less than a month after Delta reduced service between the world’s busiest airport and the Middle East’s largest hub."

It's another but more pointed salvo in the war being waged between major North American and European airlines and the Gulf airlines (Emirates, Qatar, and Etihad) over "Open Skies" agreements, which allow foreign-based airlines to greatly expand service to and from the U.S. at airfares the other airlines claim are sold at a loss.

As the Chicago Tribune editorial board opined earlier this year, "The U.S. carriers raise a valid concern. The Obama administration should move quickly to resolve this. If the Gulf States dawdle to avoid deliberations, a freeze of their airlines' expansion into U.S. markets would get their attention."

Some may say, "wake up and smell the jet fuel, Delta." You're making huge profits now, and those Gulf carriers fly newer planes, with friendlier cabin crew and with better service. And while there's some truth to all that, when I asked if his airline was indeed subsidized, a media rep for one of those Gulf airlines answered simply, "Sure, we are." (I could hardly believe my ears but I'm not making this up.)

Maybe that's why Qatar, for example, can afford to offer such low fares on top of fairly frequent discounts, such as this $500 off promo code on business class fares (it's no longer valid, but don't worry, more will come) or that Emirates earlier this year offered this two-for-one promo code from the U.S. to Bangkok, Singapore, and Kuala Lumpur, and frequently offers similar fares from New York to Milan, all of which deals U.S. and European airlines apparently felt they couldn't afford to match.

And why these Gulf carriers are planning to expand further into the U.S., Europe, and Asia.

One thing is for certain: with Delta abandoning its Dubai route, and as more U.S. airlines eliminate service on other routes to the Middle East and elsewhere, Emirates, Qatar and Etihad will be free fill the vacuum with higher fares.

And that is bad news for consumers.