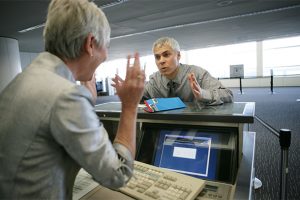 I have a long-held theory regarding the relationship between human resources and customer service: The companies that treat their employees the best are likely to treat their customers the best as well. Happy workers are helpful workers, right?

Among companies in the Transportation and Logistics category, which includes airlines, Southwest was first, at 18th overall, followed closely by JetBlue, at number 19 overall. Alaska Airlines was number 93 overall, Delta was number 238, SkyWest was 426, and American just managed to sneak into the top-500, at number 496.

Related: The Biggest Airline Innovations of 2015 Will Happen Overseas

The survey results are based on responses from more than 20,000 workers at U.S. companies and organizations with workforces of at least 2,500. The questions were simple and pointed: "On a scale of 0 - 10, how likely would you be to recommend your employer to someone else? How about other employers in your industry?"

Related: 10 Tips for Traveling as a Political Act

Southwest and JetBlue, which ranked highest among workers, are perennially among the top-ranked airlines for customer satisfaction as well. Alaska too. Delta is a bit of a head-scratcher. But United's status as a no-show in the rankings is certainly consistent with that airline's current low regard among flyers.

Read the original story: 6 Happiest Airlines in America by Tim Winship, who is a regular contributor to SmarterTravel.