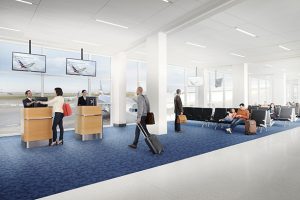 This Airline Actually Wants to Make You Happy

In 2014, we've seen ticket prices skyrocket, legroom shrink, and even industry darling JetBlue break our hearts with new fees. And while next year may bring more of the same, one airline is actually trying to make flying better.

That airline is American. Surprised?

With a number of grand plans in the work, flyers could actually experience a new and improved flight next year on American. Here's how:

American is buying 112 new aircraft next year. The new planes include long- and short-haul craft, including a number of new Airbus models. These new planes join the nearly 100 planes American got in 2014, making American's fleet the newest, and among the most fuel-efficient, in the U.S.

More exciting than new aircraft: refurbs! American is upgrading its seats on some 757s and 767s and completely overhauling the interiors of its 777s and A319s. These upgrades include fully lie-flat first-class and business-class seats on wide-body jets. The 777s will get unique mood lighting and a walk-up bar while the A319 (long considered the workhorse of the American fleet) will get new premium seating and power outlets. And in premium cabins, passengers will get new Bose headseats on certain international and transcontinental flights.

But the refreshes aren't limited to higher-paying customers, which is why even we lowly 99-percenters should welcome this news. On most aircraft, even the main cabin will get new, modern interiors, power ports, in-flight connectivity, and seatback entertainment systems. And satellite-based Internet access is coming to much of the fleet, providing connectivity on international flights for coach-class passengers.

American's upgrades aren't just taking place in the air—expect your airport experience to be better, too. The airline has big plans to reduce queues and congestion with new airport lobby designs, faster check-in kiosks, and additional kiosks at gates. New worktables with charging stations are another nice touch for to tech-savvy passengers.

In the Admirals Club lounges, American is rolling out healthy free food offerings (Greek yogurt, oatmeal, soups, fresh crudites, and so on); refurbished restroom and shower facilities, and new toiletries. Additional improvements are also in the works, although American is mum on the details.

This news comes at an opportune time for the legacy airline, which has fallen behind other airlines when it comes to entertainment and amenities. JetBlue especially, with its in-flight satellite TV, Internet access, and modern brand identity, has made American look like a bit of a flying dinosaur.

But since its merger with US Airways, American has been doing well, posting consistent profits and returning cash to shareholders. This means that the time is nigh for reinvestment in the product—namely $2 billion—and that customers could be seeing the windfall in the way of plane upgrades and a better flying experience overall.

Readers, do these upgrades make you want to fly American?

JetBlue Breaks Our Hearts: Will Cut Legroom, Charge for Bags

New Fees for Legroom Are Coming Soon on Alaska Airlines

We Flew on Norwegian's 787 Dreamliner (and It Was Awesome)

This article was originally published by SmarterTravel under the title This Airline Actually Wants to Make You Happy. Follow Dara Continenza on Google+ or email her at editor@smartertravel.com.