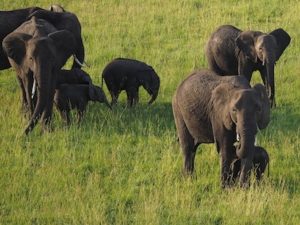 What to Expect When Going on Safari

I had never been to Africa before in all my years of traveling, and never on a Safari. When given the opportunity, I didn't exactly jump on it. I'm not sure why. The vaccines? Visas? The long flights to Nairobi? I was to travel with Micato Safaris, and before the trip I was deluged with information (Micato is the most detail-oriented travel company I've encountered). Brochures. Pamphlets. Packing lists. Would we really be sleeping in tents? Flying in single engine planes and landing on grass fields? It was all a bit daunting. I read all the info twice, but as it turned out, nothing prepared me fully for the actual experience. Here are some of the things I found most surprising, and perhaps they'll help you if you're contemplating a similar trip one day.

You don't need to bring a lot of anything.

You really need very little, so my advice is to take half (or less) of what is suggested by your safari outfitter's packing list. The brochures make it clear that because you'll be flying in small planes between camps, you need to limit the weight of your luggage to 33 pounds. In truth, no one ever weighed a single bag, and the heaviest items in my luggage were cameras and lenses. Every lodge and campsite on the trip offered professionally done, same-day laundry, included in the price. In fact, you could get by with what you wear on the plane and two changes of clothes, period.  I brought four changes and frankly, I over packed, since I availed myself of the laundry services each day. Save room in your bag for lots of camera equipment (a backup camera is a good idea, in case one breaks), batteries, lenses and so forth. Do, however, avoid bright colors (tsetse flies love blue for some reason). Khaki and tan are the way to go, even if they're not your colors.

You'll get close to the animals. Really close.

Of course you expect to see all sorts of animals in the wild. That's what a safari is all about. But you'll sometimes be mere feet away from elephants, zebras, lions, hippos and other game. Do not get out of your Land Rover to get any closer. The animals won't like it. And neither will your guides. Luxury accommodations in a tent.

Sleeping in "tents" is not what you think. Yes, some "camps" consist of canvas-clad tents. But they're deluxe tents. With firm mattresses, hot and cold running water, exemplary service, fine furnishings, and thoughtful touches everywhere.

Since I only stayed in camps and lodges approved by Micato, I can’t vouch for the entire industry, but the level of luxury was a shocker, even though the pamphlet does mention that, “the luxury of the tented camps is always a wonderful surprise.” I was expecting to be roughing it a bit more.  I’ve stayed in Ritz-Carltons that weren’t as comfortable or luxurious. Deep tubs, gushing showers, four-poster beds with deluxe linens.  And of course, the views were incomparable. We stayed in a place called Elewana Sand River Camp in the Maasai Mara, then flew to the Olare Mara Kempinski, then to the Elewana Pioneer Camp in the Serengeti National Park, and then to the Singita Grumeti Reserves, a 350,00-acre private game park, where we lodged at the Singita Sasakwa Lodge in private cottages (I could write a book about Singita Sasakwa and how over the top it is; the bathrooms were larger than my Manhattan apartment). Each one was more luxurious than the next. "Pioneer Camp" evoked images of roasting game over a campfire or something, but nothing could be further from the truth.

Gourmet cuisine in the wild.

And speaking of luxury and under-promisng, there was nothing in the Micato “Planning Information” booklet to suggest the range and quality of the cuisine we'd be enjoying. For dinner, all it says is you get a “sit-down, three-course meal” although it does mention “fruits and vegetables grown locally on small family farms, making the produce on safari especially fresh and delicious.” But it was incredible how, in the middle of nowhere, the camp and lodge chefs were able to create delicious gourmet meals for breakfast, lunch, and dinner, expertly served along with fine South African wines.  Oh, and as it turned out I needn't have worried about food-borne illness, despite the warnings of my travel medicine doctor. I ended up tossing the unused antibiotics and stomach remedies he prescribed on my way out of Nairobi Airport—another pleasant surprise.

The brochure isn't kidding when it says you'll love the people.

Another surprise: the East Africans. The Micato brochure stated, “Travellers generally travel to Africa for the love of the wildlife, but return home in love with the people.” Of course, this sounds like every other travel brochure, right? Aren't all locals friendly in the brochures?  But no copywriter could adequately describe how warm the East Africans are. I’ve traveled everywhere, and I’ve never felt so welcomed. In every camp and hotel, at the airport, in the villages we visited, they are simply the warmest, most accommodating people I’ve ever encountered. One illustration: I bring my own pillow when I travel and my tent attendant at Pioneer Camp noticed that the pillowcase was the worse for the wear after a week in the bush. Without being asked, he hand washed it and hanged it up to dry. Even in a Four Seasons, no maid has ever done that for me. These people are simply delighted to have you as their guest.

You may get to visit a slum.

And that's true no matter where you go. This was the biggest surprise of all. On our last day, Micato brought us to a Nairobi slum where the company has been involved for years by investing in the lives of the people living there. A portion of your safari cost goes into these projects. It was an eye-opening experience for sure.

Looking back, I was pretty foolish not to jump at the chance of experiencing all this. But I'm glad I did. And would do it again without hesitation.

For a current list of deals, see our fare page for Nairobi, Kenya.

Hurry Up and Wait: A Layover Guide to 20 of the Busiest Airports on the Planet