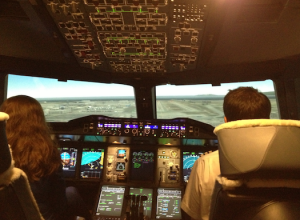 I don’t play video games, and probably I never will now that I’ve landed an Airbus A380 at airports all over the world in a flight simulator. Because really, what video game could ever compare with manning the joystick in a multi-million dollar sim?

I knew that my first flight “sim” experience would be exciting, which is why I flew all the way to London’s Heathrow Airport and the British Airways training center, but it wasn’t prepared for how thrilling it would be. BA will be launching its A380 service between Los Angeles and London and London and Hong Kong later this year, and I was one of the lucky few to grab a slot for a couple of hours in their new A380 sims.

For those of you who have never taken the controls of a sim, these sophisticated machines are enclosed cockpits resting on moveable mechanical legs that, as the name implies, simulate flight and are used for flight crew training purposes. The controls, video displays, seats and other features are identical to a real cockpit, and the windows are actually video screens that can be programmed to show airport terminals, taxiways, runways, topographical features, and weather conditions. The sim pods tilt, lurch and even rumble to recreate real-life take off and flight conditions, and speakers broadcast sounds (jet and wind noise, landing gear and flap movement, even the sound and movement of the tires bumping along the taxiway.). Under the guidance of an experienced BA captain, I took my sheepskin-upholstered seat and got a tour of the controls. At my left hand was a joystick; at my right the four levers that controlled the mighty jet’s engines; at my feet, pedals used to slow down or brake the plane on the ground. Other controls worked the flaps and landing gear and switched the auto pilot off and on. I was surprised to see that this plane has no “steering wheel.” The joystick controls all directional movement on the ground.

After watching a typical take off and landing performed by my instructor, it was my turn. Where would I like to go? Tokyo? Manhattan? Hong Kong? I released the brakes, and we were “towed” out to the taxi way. It was now my job to slowly position the aircraft for take off. After giving the engines a bit of thrust I placed my left hand on the joystick, which is used to steer the plane while on the ground, and was surprised at how sensitive it was. Only minute movements are necessary, and had this been an actual take off someone on the ground would have assumed I was inebriated as I swerved back and forth.  The simulator’s speakers broadcast engine noises and the simulator pod rumbled a bit as we passed over “imperfections” in the taxiway. Once at the head of the runway, I applied the brakes and then placed my right hand on the four throttle levers, pushing them forward in unison. And away we flew.  As we ascended, the simulator tilted and banked. (In fact, the motion was so real that after a few such take offs one member of our party became a bit airsick.) Outside the “windows” we could see a computer-generated view of greater London. The computer was programmed for a bright sunny day, but with a quick adjustment the “weather” could be switched to turbulent, cloudy, or rainy. And yes, simulated windshield wipers switched on when the rain started “pelting” our craft.

In minutes, we were descending into Hong Kong, my first port of call. I didn’t crash the plane, thankfully, but it was exactly a smooth landing. I was more successful upon subsequent landings at New York’s JFK and LAX.

One thing I learned was that there’s no such thing as a completely automated take off or landing, even when using the autopilot. Planes do not actually take off and land by themselves, much less position themselves for take off, or bring themselves to the gate. Does this all sound like fun? That doesn’t begin to describe it. I was giddy, as in joyfully elated. The two hours passed in a flash and all too soon we were back on the ground, literally and figuratively, in London. I’d do it again and again, given the chance.

The British Airways Flight Training website describes the airline’s flight simulator experiences as “the thrill of a lifetime” and that’s no exaggeration. Currently, simulator flights are available in Boeing 737-400, Boeing 757-200, and Boeing 767-300 aircraft (training on the Airbus A380 and other models in the fleet may become available in the future). A one-hour “flight” costs £399 (about $465) or £1197 (about $1800) for a three-hour flight. Gift certificates are available as well. I can’t think of a better present for anyone who ever dreamed of being a pilot. Or for the video game geek on your holiday shopping list. Or for anyone, for that matter.