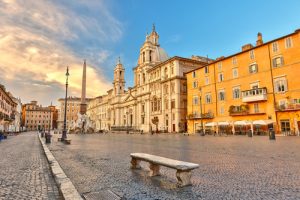 Planning for Europe in Spring

Q. We are planning a trip to four major European cities (Paris, Amsterdam, Venice, Rome) leaving in late April and returning in early May. Cities could be in whichever order that would be the cheapest. Which days are cheapest to fly abroad?

Should we book one way tickets or can one get a round trip to one city and then fly home from a different city? We are in our seventies and also would like to book 3-4 star hotel rooms. Is it possible to book from the rail stations as I did in my younger days? This would allow us to stay longer if we have more to do and perhaps even skip a city. Wondering if the Eurail pass is the way to go or just get train tickets when we need them.

A. You should probably book an “open jaw” round-trip ticket rather than two one-ways. It doesn’t much matter what arrival and departure cities you choose since the fares will be similar, but typically flying Monday to Thursday will be cheaper than weekend travel. As for hotels, since you’re not traveling during the peak summer season you can probably book “on the fly” but I do recommend looking into Tingo.com, a hotel booking site similar to Hotels.com but with the difference that if the hotel lowers your rate between the time you book and your arrival Tingo will refund the difference to your credit card. You can always cancel if you change your mind (just be sure to book a refundable rate). Seniors can often get discounted rail tickets in Europe and I would just buy point-to-point rail fares since you won’t be taking very many train trips during your stay. However, the train from either Paris or Amsterdam to either Venice or Rome can take quite a while. Paris to Rome can take 11 hours, Paris to Venice 13 hours, and Amsterdam to Venice 18-19 hours, so you might consider flying unless you’re die-hard rail fans.