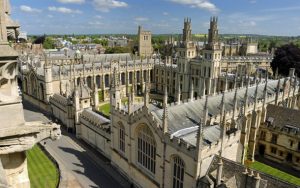 $10 Flights from U.S. to Europe on the Horizon, Vows Ryanair

Ryanair CEO Michael O'Leary promises to get you across the pond for 10 bucks.

Speaking at the Irish Hotels Federation conference in Meath, O'Leary vowed to sell 10 buck flights across the Atlantic, as soon as his carrier acquires the necessary aircraft. Flights from the U.S. to Europe would sell for $10, and transatlantic trips going the other direction would cost €10. According to O'Leary, budget airline Ryanair already has a business plan in place to make this happen.

O'Leary said no-frills Ryanair "would fly from 12 to 14 major European cities to 12 to 14 major U.S. destinations, and a full service would begin within six months of Ryanair getting the aircraft to do so."

How long before Ryanair gets enough planes to sell $10 transatlantic flights? O'Leary said it could be a while before this budget traveler's dream becomes a reality. And according to a report in the Independent, it'll be four to five years before Ryanair has the purchasing power to buy enough planes, as rapidly expanding Gulf carriers are creating intense competition for new aircraft orders.

This plan isn't entirely preposterous. Ryanair would characteristically tack on a harsh amount of additional fees for passengers buying these bargain-basement tickets. The Irish carrier has a track record of selling gimmicky cheap seats offset by crazy ancillary charges—and therein lies the rub. These next-to-nothing transatlantic fares wouldn't include the extra fees and surcharges that Ryanair dumps on travelers, such as credit-card fees, baggage fees, booking fees for tickets purchased over the phone, et al. Plus, the actual flying experience will likely be soul-destroying.

The airline would also offset the cost of $10 seats with higher-priced business-class and premium tickets. "Not every seat will be €10 of course," said O'Leary.

Would you spend seven hours in hell crossing the pond in a cut-rate Ryanair seat?

Like this story? Join the 1 million other travelers who read our free Deal Alert newsletter. It's full of our best tips, trip ideas, and travel deals. Subscribe here today!

This article was originally published by SmarterTravel under the title $10 Flights to Europe from US Cities, Vows Ryanair.