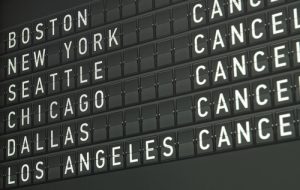 Q. My flight from Chicago to Ft Lauderdale was cancelled by United for what they said was "weather."  It was cancelled 12-hours ahead of the flight. A thunderstorm was expected in Florida but did not actually happen until later in the day. Meanwhile, both Delta and United both operated flights out of Ft Lauderdale in the morning, so obviously weather was not a problem. Now I'll be sitting at O'Hare for the next 12 hours waiting for our new flights to take off later this evening. Clearly the flight was canceled for issues other than weather, right? Do i have any recourse on recouping expenses for the day, and possibly night, should they decide to cancel my flight again due to weather?

A. Even though weather didn’t affect the other airlines, it might have affected your airline’s flight because the aircraft was coming from somewhere that experienced bad weather. It’s not just the weather where you are that causes problems; it could be weather anywhere in the country depending on the original location of your aircraft. Your only recourse is to ask for a full refund of your fare, or you should ask your airline to put you on another airline whose flights are operating (at the same fare you originally paid) if there are seats available. Unfortunately, airlines are not legally required to reimburse you for expenses, although some will do this voluntarily.