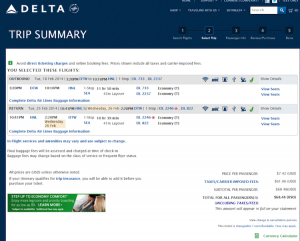 Q. I was curious why Watchdog didn’t pick up these fares when there was a glitch in the delta system?

A. Actually, we did catch them and we tweeted about them. If you’re not following us on Twitter, you should be.

And we also sent out many of them by email. However, the sale only lasted a short while, and frankly a lot of people saw the email alerts too late (in some cases, the next day) and called us “bogus liars." You know how that goes.

Consider, too, that there were literally thousands of these fares, and we are not automated, so it was impossible to list all of them.

Also, during the first 30 minutes of the “sale,” the fares were listed on Delta’s site, but Delta.com wasn’t allowing booking all the way through to confirmation. Eventually, the fares became bookable.

Other things to consider: either due to site capacity or because Delta discovered the error, Delta’s website became inaccessible around 10.40 a.m. ET. Also, we weren’t immediately sure that the fares were valid or, indeed, if Delta would wiggle out of honoring them (last we heard, third-party sites like Priceline were refusing to honor the fares, although they may have had a change of heart).

One more thing, I got an email from a very angry person who works for the Disney Company calling us to task for not emailing her a fare that she would have liked to book. But I wonder: if this travel industry employee had somehow made a huge career-ending error, perhaps listing all Disney hotel rooms at $2, costing her employer hundreds of thousands in losses, would she have wanted us to shout that from the rooftops? I personally have an ethical conflict about causing someone to get fired the day after Christmas. What’s your policy?