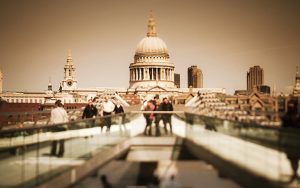 Budget airline Norwegian Air Shuttle announced it will start flying to London's Gatwick Airport from New York, Los Angeles, and Ft. Lauderdale next July. Introductory fares start at $239 each way three times a week from New York/JFK, $289 twice weekly from Los Angeles, and $289 twice weekly from Ft. Lauderdale. After the introductory period, Norwegian's website shows one-way fares from New York from $384 for August, with the lowest rates dropping back to $239 in September; nothing is posted yet for later. Add $46 each way for one checked bag, onboard meals, and advance seat reservations.

Norwegian's main product will be typical of a budget airline. The carrier will operate new Boeing 787 Dreamliner planes, with tight economy seating. But flights will feature the Dreamliner's big windows, low cabin pressure, improved humidity, and big touchscreens at each seat. Norwegian also offers a premium-economy option, which is expensive at $892 each way in September. However, with seven-across seating at 46-inch pitch, the product appears to be among the better premium-economy offerings.

Norwegian's move seems to hark back to Freddie Laker's game-changing Skytrain. The September round-trip all-up fare of $490, when paid by credit card, is half the next-lowest posted September fares of $968 nonstop for Finnair's code-share with American. So the big question arises: How will the dominant London competitors react? I see three options:

Norwegian seems to believe that its 787s, with costs some 20 percent below that of competitors' planes, will provide the margin to survive whatever retaliatory price-cutting the big airlines try. On the other hand, however, top-dollar revenues from business class allow those carriers to sell at least some economy seats at a loss for an extended period.

Norwegian's move is especially significant because it is one of the first low-fare initiatives to target the American market. Existing low-fare transatlantic operators, such as Condor and ThomasCook, focus mainly on hauling European package-tour vacationers to Florida and Las Vegas. But thanks to "open skies" rules, Norwegian is able to take aim at American travelers' top transatlantic destination. Additionally, Norwegian seems to be preempting Ryanair's often-repeated claim that it would like to offer low-fare flights from the U.S.

In short, you can look forward to an exciting summer in the U.S.-to-London airline market. Norwegian's announcement is just the beginning.

This article was originally published by SmarterTravel under the title Budget Airline Offers Radically Cheap Fares to Europe.