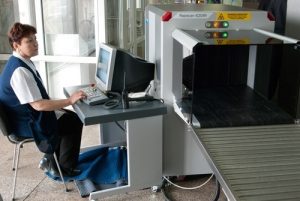 A. Not all airports require a second security check unless you leave one terminal and enter another. Frankfurt and also Tokyo are unusual in that even if you are remaining in the same terminal and just doing a connection without going "landside" you often go through security again. On the Singapore Airlines flight from Singapore to Los Angeles via Tokyo, even though you're just stopping for an hour, you still have to get off the plane and go through security a second time, despite the fact that you remain in the same terminal. The extra security check is just for added measure and I'm not sure why some airports do this and others don't, other than the Germans and Japanese are rather fastidious about procedure and safety.

It's possible that you will have to get your bags from the flight from Miami and go through security again, especially if changing terminals, depending on your flights. And personally I wouldn't leave just 90 minutes to connect, with delays possible and a terminal change possible.