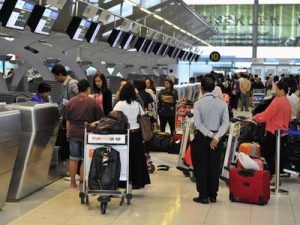 Check-in online vs. at the airport

Q. Many years ago I read in the newspaper that if you check-in online and then miss your flight, the airline considers your ticket as used and does not help out as much as if you had not checked in. Since then, I have almost always waited until I get to the airport before checking in. I find the process at the airport to be easy. The only exception is when I have flown Southwest, because checking in online early gives me better chances at a seat I like. Also, on occasion airlines have offered extra miles or points for checking in online, and I am a sucker for points. Is there a downside to checking in online, or have times have changed?

A. A ticket is only considered “used” if it’s scanned to board the flight. Merely checking in does not mean a ticket is used. However, I tweeted this question to my followers on Twitter @airfarewatchdog and one person suggested a possible downside to checking in online. American Airlines, he says, “unchecked-in” passengers on a flight because a smaller plane was substituted for a larger one. Seats were re-assigned only at airport check-in, but those who checked in online and went straight to the gate were too late to get seats on the smaller plane. If you think you’ll miss your flight, be sure to call the airline to cancel, however, because there may be a penalty for being a no-show. Southwest Airlines, for example, recently added this policy change: “If a Customer has booked a nonrefundable fare anywhere in his/her itinerary and that portion of the flight is not used and not canceled or changed by the Customer prior to scheduled departure, all unused funds on the full itinerary will be lost, and the remaining reservation will be canceled."