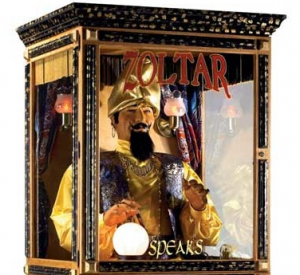 My crystal ball is somewhat cloudy, and only fools are certain, but here is my best guest as to what airline travelers will see this year.

A major airline will start charging for carry on bags. United maybe? Spirit and Allegiant already do and they haven’t gone out of business. In fact, they’re expanding. Major carriers are watching carefully.

Several airlines, such as American, are expanding carry-on storage on their older jets, or retiring them entirely with planes offering much larger bins, and about time. The bins in some of those older jets were designed 30 years ago.

Speaking of small overhead bins, nobody really likes those 50-seat jets (RJs in airline speak). Airlines don’t like them either, anymore, since they tend to be gas guzzlers. We’ll see more of them retired to the Mohave Desert this year.

I’d be shocked if the American-US Airways merger doesn’t happen this year. Will someone also gobble up Frontier Airlines? Alaska? It’s possible.  Which will lead to…

Not way higher, just a bit higher, thanks to all those mergers and capacity cuts. Routes that both AA and USAir fly nonstop (Dallas-Charlotte, for instance) will see the brunt of fare increases. But most air travel is still “discretionary”—people can choose to stay home, drive, or tele-conference. And yet, airlines are getting smarter. They have figured out that chasing market share for market share’s sake alone is a one-way trip to bankruptcy court. For example, in December JetBlue increased capacity by 6.1%. And flew exactly 6.1% more passengers. At 2% more revenue. And so…

Airlines will be Profitable

With the possible exception of Virgin America. Even though they’ll be flying with…

As a result of the fees, the higher fares, and airport/TSA hassles, more people will take to the highways and rails. Or just take a cruise from a nearby port.

Except Maybe for Non-U.S. Airlines

They have newer planes. And newer flight attendants. And  Emirates, Turkish, and other well-heeled airlines based outside North America will expand service from major U.S. airports. In April, Turkish will launch service from Houston, and has been slashing fares from there to everywhere it flies ($399 round-trip including tax to Istanbul? Take that, United). The airline plans to add flights from Atlanta, Boston, Detroit, Miami and Orlando. Qatar Airways will add flights from Chicago in April, and plans to add Boston and Detroit. Ethiad will add service from Washington this year. These “superconnector” Middle Eastern airlines may provide some stiff competition to the American, Delta and United on international routes.

We’ll see the U.S. Department of Transportation promulgate more consumer protections. One I’d like to see: no more bait and switch. If you book a nonstop flight then airlines can’t put you on a connecting flight, assuming that the nonstop you booked still operates. Another: bring back Rule 240. If an airline cancels your flight or its severely delayed, you get to fly on a competitor’s flight if that flight gets you to your destination quicker.

You already pay a fee to book an airline ticket by phone with an airline employee, but I think we’ll see more incentives for self-service this year. Maybe a charge to interact with a ticket agent at the airport? Spirit and Ryanair already charge a fee if you don’t print out your boarding pass before arriving at the terminal. We may see other airlines follow suit. You’ll be encouraged to print out your own baggage tag, too; maybe pay your bag fee at home, put it on a scale for a quick weight check by an employee, tag it, place it on a conveyor belt. And then you’ll scan your boarding pass at the Jetway entrance.

Airlines will continue to cram more seats into their planes, reducing legroom. However…

Airlines have finally squeezed you so hard in those uncomfortable seats that you’re now willing, or so they think, to pay more for slightly more comfort. JetBlue, American, Delta, United and American will all sell more “Main Cabin Extra,” “Premium Economy,” “Economy Comfort,” or similar products for upcharges of between $10 and $118 per flight segment. Not more width, but definitely more (4 inches or so) legroom. And many foreign airlines (British, Air France, Lufthansa, Cathay, etc.) will offer this sort of thing too, along with perks such as preferred boarding. Basically all you’re getting is what you used to get for free, before the airlines put the squeeze on.

American kicked it off with $68 and $88 fare add ons (not fees, fares), including a round-trip checked bag, no change fees, priority boarding, and an adult beverage. Delta quickly followed suit with a more tentative set of bundled perks. Others will follow. Just as with premium economy, it’s back to the future.