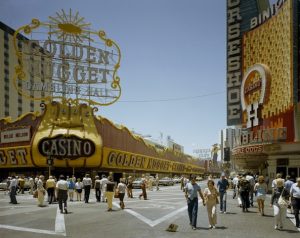 With food – good food, and lots of it – now as closely associated with the Las Vegas Strip as gambling and other legitimized debauchery, it’s no surprise that one of Sin City’s most fabled institutions – the groaning buffet – is no longer just a cheap and easy feeding trough for comp-waving slot jockeys.

From innovative ethnic dishes to five-star restaurant-worthy desserts, this is no longer just about all-you-can-eat, industrial-grade crab legs. Nope – the chefs (yes, chefs) at the top hotel buffets in Las Vegas would like you to know that they are serious about food.

Of course you get what you pay for. With all this time, money and attention lavished on the buffet, they are no longer necessarily the bargains they used to be. But try the buffets at these five Las Vegas resorts – it’s a safe bet you won’t be disappointed.

Opened in September to the tune of $17 million, this 600-seat stunner at Caesars Palace is the one everyone’s buzzing about. It features more than 500 dishes per day, served up at nine cooking stations. The décor – modern, sleek, like a fine dining restaurant more than a mess hall – is half the fun; food-wise, expect everything from fancy charcuterie and very good ceviche to authentic Mexican street food, mini soufflés for dessert and plenty of those crab legs you love. (www.caesarspalace.com)

The Buffet at Wynn Las Vegas

When it’s good, it’s very, very good – when it’s not so good, it’s still better than most others in town. Centered around the whimsical Conservatory, which looks as if it were designed by a somewhat-medicated Willy Wonka, filled with color and light and absurdly pretty floral arrangements, this is a perfect place for a leisurely and decadent weekend brunch, with lots of good seafood, great desserts and baked goods, dim sum offerings and too much else to mention here. (www.wynnlasvegas.com)

This relatively new addition to the Strip is stuck in a blank spot at the back of the very excellent Cosmopolitan resort, but once you find it, you’ll be glad you did. This one holds some nice surprises – it’s not every day you can grab all-you-can-eat bone marrow off a buffet line. Other touches include a macaroni and cheese bar, kalbi (Korean-style) ribs and beautiful macaroons in the considerable dessert section. (www.cosmopolitanlasvegas.com)

The Buffet at Bellagio

Opened along with one of the Strip’s most iconic resorts back in 1998, this one’s old enough by Vegas standards to be considered vintage. And true, it might not feature the flashiest setting (or setup), but this is classic Vegas, all the way – piles of seafood, prime rib and plenty of decadent desserts. Don’t go looking for too much in the way of innovation (for that, head across Flamingo Road to Bacchanal) and you’ll leave smiling. (www.bellagio.com)

Studio B at M Resort

One of the most attractive Las Vegas resorts built in recent years isn’t on the Strip at all; the sleek, modern M sits at the city’s southern gateway, luring road weary weekenders and locals alike. One of the reasons they come? This reasonably priced buffet, known for its offer of unlimited beer and wine at lunch and dinner, all week long. That’s one way to get people to walk out smiling – but the prices (starting at just $10.99 per person) and the selection (more than 200 items per day) help the cause immensely. (www.themresort.com) All buffets – even the best ones – have their share of detractors; it often seems that the most vocal opponents are the ones who feel ripped off after spending $40 (or more, in some cases) for a dinner visit. Silly people. When first checking out a buffet, it’s always better to start with the cheapest meal, just as a test drive. You can also ask to go have a look before bothering to wait in line. Better to do your research than get a nasty surprise once you’ve already paid up.

For many fans, the best buffet in Las Vegas isn’t a buffet at all – it’s many buffets. Caesars Entertainment sells a popular pass to its eight Las Vegas feeding troughs. Called the Buffet of Buffets (fans call it BoB), you buy the pass for $44.99 at any one of the stops; this grants you license to pig out at any of six buffets, at any time, during the next 24 hours; you can visit Bacchanal at Caesars and the Seafood Buffet at the Rio, too, but there’s a $15 upcharge per visit. (This means, obviously, that you’ll want to hit those two up at their most expensive meal of the day.)

At some casinos, gambling  could end up earning you a comp. Sit at the video poker machines, spend your money and get your free drinks, then wander into the VIP line at the buffet and eat for free. Drop by the player’s club counter in any casino you visit and inquire. Some of the smaller casinos might even give a buffet comp just for joining the club.

We hear many complaints about buffet service, but wonder how many people doing the complaining actually bother to ever tip when they hit the buffet. Yes, they don’t do as much as servers in a regular restaurant, but they do bring drinks and clear tables – try to leave anywhere from $1 to $3 per person in your party.

See our current list of low fares to Las Vegas

Above photos by the amazing Stephen Shore