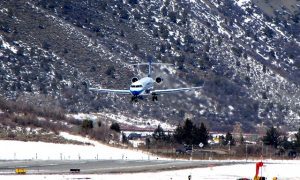 Flying is considered to be one of the safest ways to get from point A to point B. But not every airport is created equal. In no particular order, here are our picks for the scariest airports in the country.

In order to land in snowy Aspen, pilots must be specially certified to do so. This is likely due to the fact that the airport, which is wedged between two mountains, requires a swift descent at high altitude.

Takeoff from John Wayne has been likened to both a ballistic missile and a space shuttle liftoff. Due to strict noise reduction requirements, pilots must ascend at full throttle and then abruptly cut back their engines.

Chicago’s Midway is known for its short runways (they’re close to 2,000 feet shorter than the ones at newer airports), so it comes as no surprise that several pilots have overshot them throughout the years. In 2005, a Boeing 737 careened into one of the surrounding neighborhoods, killing a young boy and injuring a dozen others.

Sitka’s airport is located on a tiny island in Sitka Sound and is almost completely surrounded by water. Weather can be unpredictable, so pilots have to watch out for boulders and other debris that often wash onto its only runway during storms.

Yeager’s lone operational runway is relatively short and sits atop a flattened mountain. It runs between two cliffs, which means that if a pilot miscalculates, there’s nowhere to go but down.

San Diego’s airport (also called Lindbergh Field) is considered by some to be one of the country’s most dangerous due to its downtown location. What’s more, mountains to its north and east, Mexican airspace to its south, and tailwinds blowing in from its west sometimes force nose-to-nose takeoffs and landings.

LaGuardia is one of three airports (JFK and Newark are the other two) that make up the country’s largest airport system, so the skies surrounding it are crowded. It’s so close to Manhattan that approaching planes look like they’re skimming the skyline. During landing, pilots must make a series of tight, low-altitude turns, one of which is 180 degrees around Citi Field.

Catalina Airport (nicknamed “Airport in the Sky” due to its high elevation) is known to have downdrafts and turbulence on approach. Its runway drops off on both sides and is so raised in the middle that pilots on one end can’t see the other. Heavy rains often litter it with pieces of asphalt, potholes, and soft spots.

Telluride’s airport sits on a plateau above the San Miguel River and is higher than any other commercial airport in North America. Touch-and-go landings are prohibited, so pilots only have one shot to land on the runway, which dips in the middle.

Reagan National is in between two overlapping no-fly zones. Pilots fly what’s called the "river visual", carefully following the Potomac River to avoid the CIA headquarters and the Pentagon. On takeoff, they must ascend quickly, sharply veering left so they don’t fly over the White House.