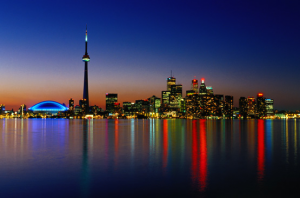 10 great reasons to fly to Toronto this year

After a barely-there winter and a heavy dose of springtime, Toronto's out and about and ready for a nice, long summer. Canada's biggest city – the city population is now pretty much tied with Chicago's at approximately 2.5 million – continues to evolve and surprise, offering appealing, hip neighborhoods and unusual attractions in town, complemented by a handful of one-of-a-kind destinations just a short drive out of the city. Simply put: There's a ton to see. Here are ten musts. If you're flying, be sure to check out Porter Airlines, which services close-in Toronto Island Airport just a few minutes from downtown via free shuttle bus. Porter offers frequent promo codes up to 50% off, which rival Air Canada often matches for flights into Pearson Airport.

1. Get extreme: Toronto, tame? Say that after you hit the city's newest attraction, EdgeWalk. How does it work? You pay $175, you put on a harness and get hooked to a guide rail. Then someone pushes you out the window of a 116-story tower, where you spend approximately half an hour staring down at the city below, with nothing but a little see-through ledge at your feet. If you're not almost throwing up in terror at the prospect (we kind of are), you can find out more at edgewalkcntower.ca.

2. Get naked: Toronto may be getting more crowded all the time, but out on the Toronto Islands, that little emerald necklace just a short ferry ride from the downtown waterfront, things tend to stay the same. Get house envy in its charming residential areas, sip coffee at the relaxed Rectory Café, take a brisk walk along the boardwalk, hit the little amusement park or – if you dare – head through the brush towards the island chain's western end to one of the city's (the planet's?) most famous nude beaches.

3. Eat dim sum: Nearly fifty percent of Toronto's population is foreign-born, and if the immense array of restaurants in the city and suburbs is any guide, plenty of them hail from Asia. While the heaving Chinatown along Spadina Avenue is what most tourists see, you really need to slot in some time with the suburbs north of Highway 401. These bland hellscapes conceal more than their share of outstanding dim sum palaces, where it's as much about the experience of sampling as many dishes as possible in almost theatrical surroundings as it is about eating your lunch. The surroundings at Yang's Fine Chinese in Richmond Hill aren't exactly palatial, but the food is, at its best, fit for a king (9665 Bayview Avenue). Herbivores will have their socks knocked off by the often blissfully delicate dim sum at Graceful Vegetarian in Markham; from here, you're just across the parking lot from the Pacific Mall, a multi-level, are-we-in-Asia shopping center (7131 Kennedy Road).

4. Try the wine: If you haven't heard about Ontario's booming wine industry, that's not because the wine's not often really great and occasionally nothing short of superb, it's because Ontario's oenophiles are too busy getting high on their own supply to figure out how to export the stuff. Much of the best vintages come from the vineyards that line the scenic back roads of the Niagara Peninsula, less than an hour from town, where wineries like Malivoire, Henry of Pelham, and Inniskillin are musts. Where there's wine, there's food, and some of the best meals you'll eat on your trip are going to be out here, guaranteed. For a strict farm-to-table ethic and outstanding cooking, hit Treadwell in Port Dalhousie; for the full, picture-postcard experience, visit elegant Peller Estates in ridiculously cute Niagara-on-the-Lake for a leisurely fine-dining lunch among the vineyards (winecountryontario.ca).

5. Get wet: Speaking of all things Niagara, you can't come all the way up to Toronto without making the pilgrimage to the city of Niagara Falls, Canada's own Las Vegas, a glittering and unabashedly mass-appeal tourist zone towering above the thundering, 170 foot-high Horseshoe Falls. You don't have to gamble in the casinos or even bother with the insane kitsch that defines the famous Clinton Hill entertainment zone, but its fun to give it a whirl anyway. The main attraction, though, now and forever, remains the falls themselves. And the best way to get to know them is to hop onboard the historic Maid of the Mist steamboats, which get you up close and personal. And wet (maidofthemist.com).

6. Catch a flick: To see the city at its most glam, hit the annual Toronto International Film Festival in September, which draws A-listers from all over the world for big premieres and bigger parties. Can't make it? All-access pass lost in the mail? The festival's super-cool TIFF Bell Lightbox theater complex downtown keeps the action going 365 days a year, with an impressive selection of films and events spread out over multiple cinemas, galleries, studios, a reference library, shop, a restaurant and lounge. Film lovers could easily make a day of it (tiff.net).

7. Buzz, buzz: The northern climate and long winters (well, usually) mean tons of dark days and a need for a great deal of coffee to keep motivated. The scene, while always strong, has really been evolving lately, to the point where you can buy beans that rival the ones you find on shelves at the best roaster-cafes in the Pacific Northwest, or San Francisco. For the whole package – beans worth bringing home, perfect cortados, people watching – hit Te Aro, a converted garage space in Leslieville (983 Queen Street East).

8. Have a shoegasm: The Bata Shoe Museum isn't like other museums. Other museums probably don't have more than 12,500 shoes (from all around the world) in their collection. Of course, not all museums were founded by Sonja Bata, who married into the famous Czech shoemaking family and helped rebuild the company after the fall of communism. Housed in a striking modern building on the western edge of the city's most upmarket shopping district, it's almost like they made a secret pact to build the museum here, in order to help boost sales in the shoe department at nearby Holt-Renfrew, Canada's most la-di-da department store (batashoemuseum.ca).

9. Go out: To see Toronto at its most fun after dark, give downtown a wide berth and head into the much funkier (and hipper) neighborhoods. As a rule, west is best – you can't fail along Queen Street West, heading out from the city center; things tend to get more up-to-the-minute as you go. Make your end destination the Parkdale neighborhood's Grand Electric, a bustling, mod-Mexican cantina, currently one of the more buzzed-about addresses in town, both food and scene-wise (1330 Queen Street West).

10. Festival times: Few cities in North America offer as much legit stage action as Toronto does, but in the warmer months, much of the top talent (and their followers) can be seen just a short drive out of town, at Ontario's two world-class theater events, the Stratford Shakespeare Festival (April-October) out in farm country, and the Shaw Festival, over in Niagara-on-the-Lake (April-November). From Broadway blockbusters to Shakespeare's finest, George Bernard Shaw's classics and lots of other thoughtful little plays both old and new, both festivals offer plenty to suit all tastes. Venues are comfortable, the tickets generally affordable and the locations are really nice – enough to keep you around for a whole weekend. (stratfordfestival.ca; shawfest.com).