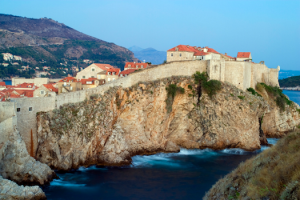 'Game of Thrones' in the Real World: See Where the HBO Hit Was Filmed

When you play the game of thrones, you win or you die. When you watch the Game of Thrones on HBO, you just plain win. The hit series, based on George R.R. Martin's massively popular A Song of Ice and Fire novels, is that good. To celebrate its second-season premiere, we're taking you behind the scenes for a look at the filming locations used to bring this fantasy epic to life.

If the Azure Window, Tollymore Forest, and the Mourne Mountains sound like fictional places from Thrones' Seven Kingdoms, it may be time to brush up on your real-world geography: These fascinating places—and others spanning four countries and thousands of miles—were used by the production team to give the show's fantasy world its vivid lived-in feel.

Primary filming for seasons one and two occurred on a soundstage at Paint Hall Studios in Belfast, Northern Ireland. But just as Peter Jackson's Lord of the Rings trilogy used numerous locations in New Zealand to stand in for everything from Mordor to the Shire, the Game of Thrones team took advantage of Belfast and its environs to double for many different locations within Thrones' vast fantasy world.

In the first season of Game of Thrones, the nomadic Dothraki horse riders gather at a city called Vaes Dothrak, which is marked by two gigantic bronze stallions whose hooves meet midair to form an arch above its windswept entryway. The HBO production team "used a place called Sandy Brae in the Mourne Mountains of Northern Ireland to stand in for Vaes Dothrak," says Phil Bicking of the popular Game of Thrones website WinterIsComing.Net. Interestingly, the Mourne Mountains were once an inspiration for another famed fantasy epic, The Chronicles of Narnia by C.S. Lewis.

Another central location from season one is Winterfell, the seat of power in the North. The 18th-century exterior of Castle Ward in County Down, Northern Ireland, may be unrecognizable from the outside as Ned Stark's ancestral home, but it was used for all shots of the castle's courtyard—such as the scene where King Robert Baratheon arrives in the North. Saintfield Estates doubled as Winterfell's godswood.

You'll also spot hints of the North in Tollymore Forest, which is featured prominently in the prologue portion of the show's pilot episode and the pivotal scene where the Starks first find the direwolves. Cairncastle, meanwhile, served as the location where Ned Stark beheads the deserter Will south of the Wall.

Speaking of the Wall (a towering 700-foot barrier of ice meant to keep out the dangers beyond), Bicking says, "They built a huge Castle Black set in the abandoned Magheramorne Quarry, complete with working winch cage." Just don't expect to find much Beyond the Wall if you visit and reach the top of the quarry. The impressive scenes shot atop the wall were filmed inside Paint Hall Studios.
Some of the action in season two shifts to the Iron Islands, which are the ancestral home of the seafaring Greyjoys. "Because our story reached out toward seagoing adventures [and] featured the Iron Islands and Pyke, [we] needed something brand-new and spectacular," says Location Manager Robert Boake. The production team found it near Ballintoy Harbour—and more specifically, Lordsport Harbour—where many of the Iron Islands scenes were filmed.

"There are also reports of filming at Carrick-a-Rede rope bridge," adds Bicking. Those are likely for the Iron Islands sequences as well.

Malta's well-preserved former capital, Mdina, was used in season one to represent King's Landing, the capital city of the Seven Kingdoms. Like King's Landing, Mdina is a walled medieval city built upon a hill, but unlike King's Landing, Mdina is an inland city—so the production was limited to interior shots such as side streets and the town gate, which can be seen when Ned Stark arrives. Nearby Ft. Manoel doubles as the great Sept of Baelor, which can be seen when Ned Stark departs (in a manner of speaking).

One of Malta's most spectacular natural attractions, the Azure Window on the island of Gozo, stood in for the location of Danaerys Targaryan's wedding to Khal Drogo. Visitors can explore the site by foot or rent a small boat at the nearby Inland Sea to view this natural wonder from the ocean.

The Red Keep at King's Landing is home to the Iron Throne of Westeros. For season one, the HBO production team used various locations around Malta to represent the keep, including the real-life residence of the president of Malta, San Anton Palace. The gates of Ft. Ricasoli doubled as the Red Keep's gates; Ft. St. Angelo was used for the scenes of Arya Stark chasing cats; and St. Dominic monastery stood in for the scene where Ned Stark confronts Cersei Lanister in the godswood.

Beyond the Wall, season two will see Jon Snow and the brothers of the Night's Watch face untold dangers in the form of human Wildlings and undead White Walkers. "In season one, we had places we could snow up with artificial snow, but north of the Wall in season two when Jon Snow goes to the Frostfangs demanded a bigger landscape," says Line Producer Chris Newman. Primary filming for these scenes, which encompass both the Frostfangs and the Fist of the First Men, occurred at the Svinafellsjokull calving glacier in Skaftafell, followed by shooting near Smyrlabjorg and Vik on Hofdabrekkuheidi.

"We always knew we wanted something shatteringly beautiful and barren and brutal for this part of Jon's journey, because he's in the true North now," adds Benioff. "It's all real. It’s all in camera. We're not doing anything in postproduction to add mountains or snow or anything."

In season two, filming for King's Landing and the Red Keep shifted from Malta to the historic parts of Dubrovnik and the Minceta, Bokar, and Lovrijenac fortresses in Croatia, which allowed for more exterior shots of an authentic walled medieval city. "King's Landing might be the single most important location in the entire show, and it has to look right," says Co-Executive Producer David Benioff.

"To find a full-on, immaculately preserved medieval walled city that actually looks uncannily like King's Landing where the bulk of our show is set, that was in and of itself such an amazing find," adds Co-Executive Producer D.B. Weiss.
Advertisement

The Game of Thrones production team used the island of Lokrum, just off the coast of Dubrovnik, as a stand-in for the city of Qarth near the Jade Sea, which is visited by Danaerys Targaryan in season two. A set was also constructed at the Dubac quarry in Croatia to double for the gates of Qarth.

Looking ahead, seasons three and beyond are also likely to be shot in Iceland, Croatia, and Northern Ireland. But as the story's scale and scope continues to grow—there's a whole continent beyond the Narrow Sea that we’ve barely explored, after all—the production will need to find new locations to match. Where do you think they should shoot for season three? What locations are you most looking forward to seeing in the upcoming season?

Want more? Read SmarterTravel's exclusive new interview with author George R.R. Martin, in which he discusses the real-world places that inspired his fantasy masterpiece, reveals the historical model for the central clash in season two, and makes some of his most revealing comments yet about what to expect in the upcoming sixth book, The Winds of Winter.