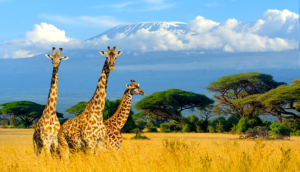 Safari Sale: Flights to Kenya and Tanzania Starting at $549 Roundtrip

It looks like this unadvertised sale has come back to the same watering hole. If going on an African safari at the top of your bucket list, you're one step closer to making that dream trip happen with these fabulous fares to Nairobi, Kenya (NBO), and Dar es Salaam (DAR), Tanzania. Top-notch carriers like Swiss, Lufthansa, KLM, and Air France, are offering itineraries from airports all across America, starting at just $549 roundtrip.

After touching down in Nairobi, you'll be perfectly located to explore the nearby Nairobi National Park, Sheldrake Elephant Orphanage, Giraffe Manor, and just 5 hours away from the stunning Masai Mara National Reserve. Where if you're lucky, you'll grab a glimpse of the Big Five in action.

If Dar Es Salaam is the destination you have in mind, the beautiful island of  Zanzibar is a quick ferry ride away, and flights to the base of Kilimanjaro take off daily.

If your city isn't listed, it doesn't mean it's not marked down. Check out our Nairobi (NBO) and Dar Es Salaam (DAR) flight deals page to find out the lowest price from your local airport.

Fares include a carry-on bag, one personal item, and two pieces of checked luggage.

Take note that on some segments of the journey, a long layover or an overnight may be required in Europe.

As an example, searching on StarAlliance members, I found seats departing Chicago ORD on Sunday, November 8, returning from Nairobi NBO on Saturday, November 21, 2020.