Crazy cheap Canadian flights are in full swing with the "Loonie Seat Sale" from Swoop. These prices might blow your mind. The lowest base fares are just a "loonie" ($1 CAD coin) plus taxes. Flights within Canada are as low as $50 CAD roundtrip and flights from the U.S. to Canada start from $129 USD roundtrip. Nearly all routes on Swoop are heavily discounted for travel throughout the year — including flights from Canada to Mexico and the Caribbean from $220 CAD roundtrip.

Over 65 routes are on sale with a limited amount of seats available in each market. In total, 100,000 seats have been marked down so get to booking before your neighbor snags the last cheap flight. We're already seeing the lowest fares in some markets have sold out.

Some routes are seasonal and not all routes have availability in each month. To get the lowest price, you may have to book two separate one-way fares in each direction. Click on the fare details below for more booking info.

Tickets must be booked by January 21, 2020, at 11:59 pm MT, or while seats last. Some of the lowest advertised fares have already sold out.

All domestic Canadian fares work in the reverse direction as well. Fares may vary by a few dollars depending on the city of origin.

Flights from Canada to the United States

For roundtrip flights from Canada to the U.S., you'll usually need to book two separate one-way fares in each direction to get the lowest prices. Most other routes are lowest when booking simple roundtrip flights.

Flights from the United States to Canada

You may need to book two separate one-way fares in each direction to get the lowest fares. Click on the fare details for more booking info.

These fares only include one small personal item. Checked bag and carry-on bag fees start at $32-$57 CAD each way when purchased during the initial booking. Higher fees apply after booking and at the airport.

Searching on Swoop's site, I found a flight departing Winnipeg YWG on Saturday, May 23, returning from Victoria YYJ on Tuesday, May 26, for $65 CAD roundtrip. 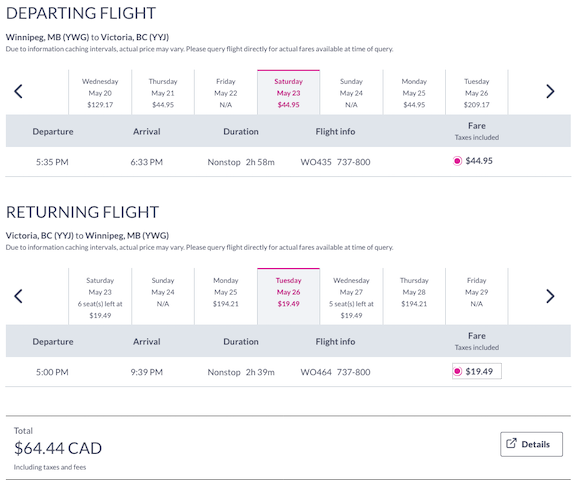