Fly Norwegian to Europe from $260+ Roundtrip

Planning a trip to Europe in 2020? Save on nonstop flights with Norwegian Air's latest sale on flights to Europe. One-way flights start as low as $119, and roundtrip itineraries can be purchased for as little as $260+!

Cities in Spain, France, England, Scandinavia, and other destinations throughout Europe are seeing some excellent prices for nonstop travel. Over 40 routes are on sale so take a look below and see what's departing from your neck of the woods.

The availability of sale fares varies by route. The lowest fares are generally for winter travel on year-round routes. For seasonal routes, the lowest fares will be available in April/May and/or September/October. Since each city-to-city pair has a different travel window and departure schedule, click on the fare details links below to see which dates are available from your nearest airport.

To get these total roundtrip prices, you may need to book two separate one-way fares in each direction. Book outbound flights in USD and inbound flights in another currency on a foreign version of Norwegian's website. Some third-party sites may sell a simple roundtrip itinerary for a similar price.

Meals and snack services are not included in Noreweigan's LowFare. Refreshments may be purchased on board.

Norwegian sells a LowFare+ option, which varies in extra cost. It includes one free checked bag and free meals onboard for all routes. The LowFare+ option also includes seat selection on all routes except flights to London, Barcelona, and Madrid. Seat selection fees will still apply for LowFare+ fares to England and Spain.

Major carriers such as American, Delta, United, British Airways, Iberia, and Air France often match Norwegian fares with similar prices in the major markets. Make sure to compare fares across all airlines and total costs depending on your travel preferences. 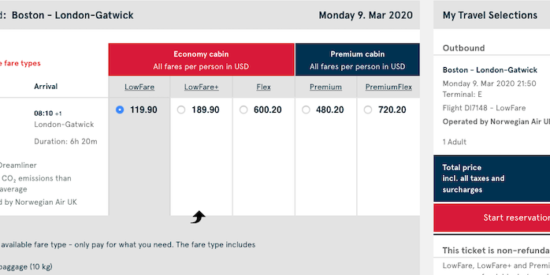