New Year's Sale to Hawaii from $258+ Roundtrip on Hawaiian Airlines

Aloha to 2020! Hawaiian Airlines is celebrating the new year with a great sale to the 50th state starting from $258 roundtrip. And once you're in Hawaii, you can hop around the islands from just $39 one-way.

Enjoy Hawaiian hospitality on your way to paradise with complimentary meal service on all flights between the U.S. Mainland and Hawaii. You might even want to consider booking two one-way tickets to and from different Hawaiian islands, because island hopping has never been cheaper!

These fares include a carry-on bag plus one personal item. The first checked piece of luggage will cost $30 each-way ($25 within Hawaii).

Related:  A New Look at Basic Economy for Domestic and Short-Haul International Travel 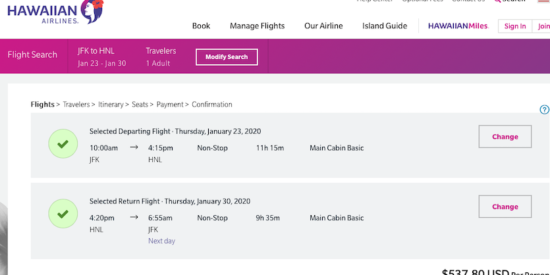