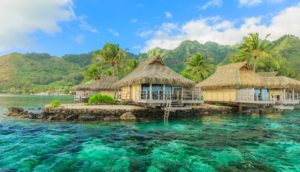 Nationwide Sale to Tahiti: Flights Starting at $675 Roundtrip, Price Drops from Most US Airports

Dreaming of overwater bungalows and sapphire blue seas? Look no further because we've got the perfect deal for you! United Airlines is dropping $400-500 off their regular rates to Tahiti with West Coast airports starting at only $675 roundtrip, and pretty much everywhere else in America for just $890!

So whether you're looking for a spot to celebrate your honeymoon, anniversary, or just an exotic escape during the winter, these are some phenomenal prices to paradise in the South Pacific.

Most seat availability can be found in January and February.

Portland, OR to Papeete $890 roundtrip

There may be great deals from or to other cities as well. If your airport isn't listed, have a look at all of our fares to Papeete (PPT) and see what's available from your nearest tarmac.

If Tahiti is a tad too far away for your liking, check out our other Island Getaways Flight Deals for something a little closer to home.

These fares include one free checked bag in addition to a carry-on bag plus a personal item.