Montreal is often labeled one of the most European cities in North America and since it's in the French-Canadian state of Quebec, you can practice your french and enjoy a hockey game at the same time. On the other hand, Quebecers can escape a bit of winter with a super cheap flight to California.

Best of all, these are regular Main Cabin Economy fares so no need to worry about the extra restrictions of Basic Economy.

Update: This sale seems to be fairly widespread between Canada and cities across the U.S. Although these prices provide the best value from/to the West Coast, you'll find similar prices from/to other cities throughout the U.S.

To get these total roundtrip prices, you must book two separate one-way fares in each direction. Use a card with no foreign transaction fees to avoid any extra charges if payment in a foreign currency is required. Prices will be slightly higher when booking a simple roundtrip itinerary.

For more deals to Canada, have a look at all of our fares to Montreal (YUL), Toronto (YYZ), Vancouver (YVR), Calgary (YYC), Ottawa (YOW), and Quebec (YQB).

Flights from Canada to the U.S. are cheapest by booking a simple roundtrip itinerary.

For more deals to the Western USA, have a look at all of our fares to Los Angeles (LAX), San Francisco (SFO), San Diego (SAN), Seattle (SEA), Houston (IAH), and Dallas (DFW).

These fares include a carry-on bag plus a small personal item. Checked bag fees start at $30 each way.

These are regular Main Cabin Economy fares, which include standard advanced seat assignments. 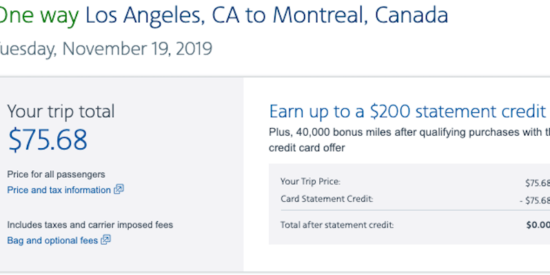 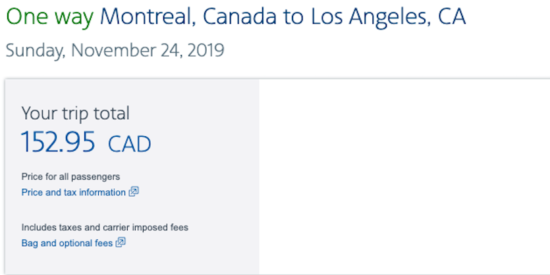