Save on your next Alaska Airlines flight for winter travel. Nearly all of the airline's nonstop routes are seeing some solid fares from $49 one-way or $97+ roundtrip. Many routes are also lower than advertised and some coast-to-coast flights are as low as $99 each way or $197 roundtrip.

Other mainline carriers such as American, Delta, Hawaiian, JetBlue, Southwest, and United are price matching in most markets, so make sure to compare to find the best deal for your travel needs.

All fares are nonstop and also domestic flights also work in the reverse direction.

These fares could change in price at any moment and are mostly available for winter travel between January and early March. A few may have some travel dates in early December.

New York to Portland, OR $237 roundtrip

On Alaska Airlines (and most other carriers except United), these fares include one carry-on bag plus one small personal item. Checked bag fees start at $30 each way.

Alaska's Saver Fares allow for limited seat selection in the back of the aircraft. However, finding seats next to a travel partner may be difficult on some routes. If you choose not to select a seat, one will be assigned to you during check-in.

As an example, I found seats departing Los Angeles LAX on Thursday, January 30, returning from Honolulu HNL on Monday, February 3, 2020, for $298 roundtrip. 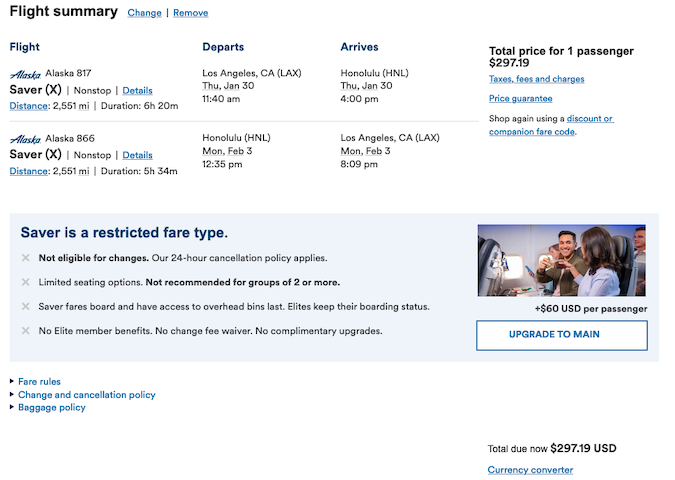