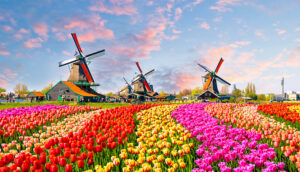 We love nationwide deals. And even though some major markets have seen lower fares, today we're seeing amazing prices from nearly every city in the U.S. to Amsterdam ($458 RT), Paris ($489 RT), and more. Flights are operated by American Airlines and sold as British Airways codeshare flights. These prices are only found on third party booking sites, which means these great fares could disappear soon.

More cities in Europe are now cheap from all over the U.S. Flights to Madrid (MAD) and Barcelona (BCN) are around $458 RT on American or Delta, flights to Frankfurt (FRA) and Munich (MUC) are around $530 RT, and flights to London (LHR) are around $572 RT.

This sale was matched by United and Star Alliance partners yesterday as well. You'll now find the same or similar pricing on United flights from nearly everywhere in the U.S. to Amsterdam and Paris. And just this afternoon it looks like United also has low fares around $472 RT to Milan (MXP) from just about anywhere, USA.

Best of all, these prices can be found for daily travel, which is extremely rare for the lowest sale fares to Europe. Book now! These fares are likely to be gone in a flash.

More European Cities on Sale from Nearly Every U.S. City

This is just a sample of deals available. There are several other cities included in this nationwide sale. Even if your city isn't listed, make sure to check the price from your local airport for a super deal.

There are certain U.S. hub cities that are excluded depending on which city in Europe you're searching for flight deals. If you live in one of these hub cities, look at flights from smaller airports nearby for a super deal to Europe. Some major markets like New York, San Fran, and L.A. may have lower fares on other airlines.

These are Basic Economy fares, which only include a carry-on bag plus one personal item. Other restrictions apply. The first checked piece of luggage will cost $60 each-way. In most cases, it is the same price for an upgrade to a Main Cabin Economy fare, which includes one free checked bag and more.

Seats will be assigned at random upon check-in for these prices. You may be able to pay a fee to choose a seat. Main Cabin Economy fares include standard seat selection.

Upgrading to Main Cabin Economy will cost an additional $120-$160 roundtrip, and will include one free checked bag, seat selection, and the ticket will be eligible for upgrades. American allows ticket changes (fee applies) on both Basic Economy and Main Cabin Economy fares for European flights. Delta and United only allow ticket changes (fee applies) on standard Economy fares.

As an example, I found a flight departing San Diego SAN on Friday, December 6, returning from Amsterdam AMS on Sunday, December 15, for $458 roundtrip. 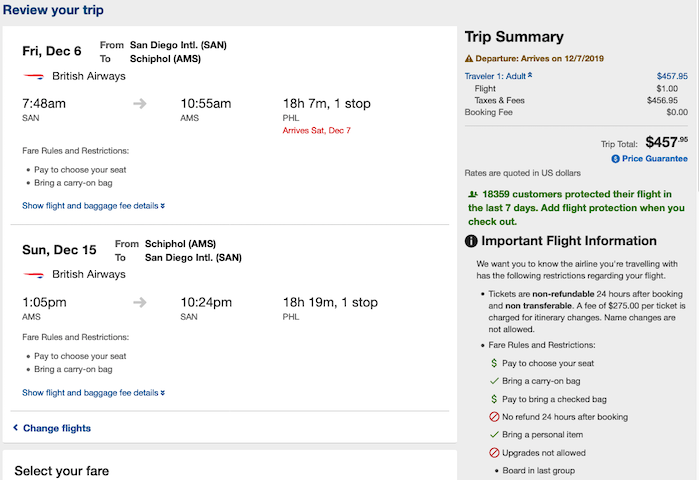