Don't pack away that bathing suit just yet, there's still time to splash around in the sun this fall in gorgeous Grand Cayman. Fly from numerous airports nationwide to the charming Caribbean cays for just $202+ roundtrip. JetBlue, American, and United Airlines are duking it out and price matching on this unadvertised sale, driving fares down to the island paradise.

This sale is unadvertised, and fares may jump at any moment. Secure your low fare by booking now and taking advantage of the 24-hour risk-free cancellation to think about your plans.

We're seeing plenty of deals to island destinations today. So, make sure to have a peek at our dedicated Caribbean flight deals page to see what else is on sale.

All of these fares include a carry-on bag plus a small personal item except United which only allows for an individual item that fits under the seat in front of you. The first checked piece of luggage will cost $30 each-way.

JetBlue includes standard advanced seat assignments. On American and United, seats will be assigned at random upon check-in for these Basic Economy prices.

Upgrading to a Main Cabin Economy fare on American or United generally costs $30 more roundtrip. This type of fare will include advanced seat selection and allow for ticket changes (fee applies)/upgrades. A checked bag is the same $30 fee each way. 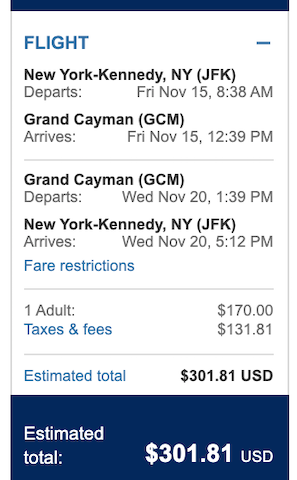