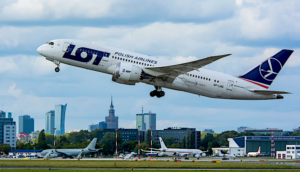 While we've seen our fair share of deals to Madrid, London, and Paris lately. Hidden gems in Eastern Europe like Prague (PRG), Krakow (KRK), and Budapest (BUD) often get excluded in those unadvertised pop-up deals.

Not this time around! Take advantage of LOT Polish Airlines' huge fall and winter sale to Europe to explore Christmas markets, or whisk your special one away for a romantic Valentine's escape. Flights start at $494 roundtrip, and almost every destination in Eastern Europe and beyond are seeing markdowns hundreds of dollars less than their usual price.

Also, you'll be happy to hear all these fares include a free first checked bag, and the long-haul legs are onboard LOT's new 787 Dreamliners. So travel in style and comfort when enjoying the sights of these budget-friendly beauties.

Tickets must be purchased by Wednesday, September 25, 2019.

Sale fares include a carry-on bag, a personal item, and one free checked bag up to 50lbs/23kg each.

Depending on your final destination, some layovers might be extended or overnight. But don't take that as a hindrance, use it to explore Warsaw along the way -  making a 2-for-1 deal. For most city-to-city pairs quick connections are available

Searching the LOT website, I found seats departing Los Angeles LAX on Saturday, November 23, with a return flight from Budapest BUD on Monday, December 2, 2019, for $554 roundtrip. Perfect for a Thanksgiving week getaway to swap out some turkey and gravy for goulash.